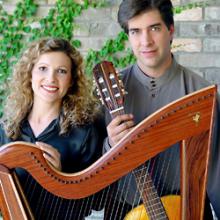 There is a wonderful chemistry between husband and wife, Randy and Pamela Copus, the duo who comprise 2002. Reviewers and fans alike are amazed to learn that the peaceful, soothing, ethereal, richly layered music that is their signature sound and has given them resident status on Billboard’s New Age Chart for more than six years is created by only two musicians, but it is. True, they are two exceptionally talented musicians, perfectionists in both their art and their craft. Randy Copus plays piano, electric cello, guitar, bass and keyboards. Pamela Copus plays flutes, harp, keyboards and a wind instrument called a WX5, along with exotic instruments she collects during her travels around the world and learns to play. Both musicians also provide all of the vocals on their albums, recording their voices many, many times and layering them in their state of the art studio in Texas to create a “virtual” choir with a celestial, angelic quality. The vocals also have many dimensions, as words and chants in Sanskrit, Spanish, Latin and Japanese, representing sacred traditions throughout the world, can be heard on their albums.

Many of the ideas for 2002’s albums come simply from being in the studio together. Others from myths and legend, some inspired by a particular instrument, while others are inexplicable. Pamela and Randy say their music has always had a strong visual aspect — they don’t just hear the music, they see it in their minds as it is formed. An album or song idea can be born out of the simplest visual image such as a butterfly emerging from a cocoon, a particularly starry sky or a magical night spent camping in Chaco Canyon. One day while rummaging through her extensive collection of flutes, Pamela came across a flute they had dubbed “cruel flute” because the hand positioning was unnatural and it was a painful flute to play. This day, however, the flute felt warm and alive in her hands, and she ventured into the isolation booth and began to breathe it to life. Fortunately, Randy quickly snapped the record button as cruel flute’s story poured out. Longing, pain, joy, remembrance, an entire lifetime was locked inside of this flute. When it finished, they were both astonished and subsequently found it easy to weave the rest of the instruments around cruel flute’s melodies. “The song had been there all along. We were just privileged to capture it,” explained Pamela. “There are songs locked up inside all of my instruments. They start singing before I even touch them. Picking one up is like rediscovering parts of myself I’ve forgotten.”

“Music is an extension of all that is natural and so has the power to restore the natural balance of joy and healing,” say Randy and Pamela. Certainly the power of 2002’s music to restore and heal and bring joy is something that has been confirmed through many, many letters from fans who write to tell their beautiful stories of how 2002’s music has been with them during the most significant and profound experiences of their lives.

When The Sacred Well was released in the fall, 2002, Pamela and Randy's three year old nephew, a child who was never still, sat frozen in front of the stereo as it was played at his home for the first time. He remained transfixed for the entire album. Then he turned and said to his parents, “God is in there.” In shock his father asked him to repeat what he said and he pointed at the stereo and repeated, “God is in there.” Pamela suggests, “Perhaps he was onto something because for me, music is like coming home. It’s that little piece of heaven we get to keep to remind us.”

Having already achieved phenomenal success and critical acclaim through seven releases with Real Music since 1996, 2002 has still managed to surpass itself with their eighth, This Moment Now. Twenty years ago Pamela and Randy lived for awhile in different parts of the country, and part of their staying in touch was a steady stream of love letters to each other. They wanted to do an album focused upon love and as the work began to grow, the music responded in the form not only of love between two people but also as a vehicle expressing the great love that exists in all living things. The music captures an enchanted moment, an opportunity to be free of the mental chatter that takes us out of the now and to cocoon in the awareness of love.

BUY NOW
Across an Ocean of Dreams