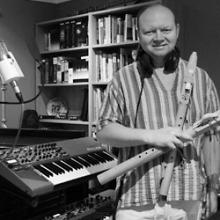 Amberfern is Dr. Clive Brooks, a composer of relaxing chill-out music living on England’s South West coast. The artist name Amberfern came from the ferns that grow throughout the nearby woodlands, and in the autumn turn a golden amber color. Most of his influences come from nature and the natural world. In his 2013 release AquaEssence, these influences come direct from the ocean which he now lives alongside.

Music has been his encompassing passion over the last thirty years. In addition to producing his own music, he is also the author of twelve books, holds a Bachelor’s degree in Cultural Studies and a PhD. in Business.

As Amberfern, he plays a wide variety of instruments including assorted types of guitars, basses, piano, keyboards, synthesizers, drums, percussion, ethnic flute and hand drums, together with a growing number of unusual and evocative world instruments. He generally works alone, enjoying the flexibility of being able to work calmly, slowly and expressively within his own studio space. However, he can also often be found composing out on location. He calls this his “sound sketching”.  He uses simple musical recording tools on an Apple iPad or MacBook Air and tries to capture the overall essence and immediacy of the location surrounding him, working with sounds in much the same way that an impressionistic painter works with paints. These sound sketches are then taken back to his studio for further development. Examples of this technique in action can be found on the tracks “Paleokastritas” from the Quiescence: A World at Peace album, which started life on location on the Island of Corfu in Greece, and “Deya” from the Distant Horizons: Mediterranean album, which was conceived on a mountaintop in Majorca, Spain. Indeed it was during several trips to these Balearic islands in the Mediterranean sea that he began to develop an interest for Ibiza chill-out grooves and started experimenting with ways in which his new age work could be expanded to encompass this relaxed, sunny vibe too. Hopefully we shall be hearing the results of some of this soon.

Although often quite new and experimental in approach, Amberfern’s relaxing music is appealing, accessible and easy for everyone to enjoy. The expansive and silky-smooth Amberfern signature sound is produced by combining a variety of ethnic instruments with organic field recordings and gentle synthesis to evoke essences of distant landscapes and seascapes, with the intention of projecting listeners into unusual, often exotic places as they bathe in the music and relax.

There is something special about this music; it feels good, balanced, in harmony and it bring a sence of well-being.

AquaEssence: An Ocean of Calm