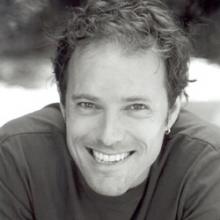 “I found my calling at an early age. Music. All styles, all forms. A barrier-free medium for expressing emotion and spreading peace. A sanctuary against the hardships of life. A slice of perfection and tranquility amidst the chaos. For me a religion of sorts.”

The Spirit of Yoga, the musical sanctuary Leinbach composed specially for avid ashtanga yoga practitioner and prominent vinyasa flow yoga teacher, Shiva Rea, also provides a haven for those seeking “tranquility amidst the chaos,” whether through meditation or simply through nurturing themselves with a soothing and relaxing backdrop wherever they happen to be.

Leinbach acquired his BA in music from the University of California, Santa Cruz, after previously studying at the University of Wisconsin, Madison and Berklee College of Music in Boston. While focusing primarily on drumming, he also cultivated proficiency on piano and guitar, studied composition, and enjoyed singing in several choirs. Ben started drumming in 1978, and developed a taste for a wide variety of music. He gigs regularly in the jazz, rock, blues, funk, pop, and Latin-jazz genres. He has performed with sax great Chico Freeman, jazz singer Kurt Elling, and has jammed with Joshua Redman. A few of his former bands shared bills with Green Day, Primus, and John Scofield. Since 1992 Ben has been freelance engineering at several San Francisco/Bay Area recording studios. He has worked with a vast array of artists including rapper E-40, percussion greats Pops and Peto Escovedo, film composer Lawrence Rosenthal, world music artist Jai Uttal, and steel pan maestro Andy Narell. Ben’s production and composition endeavors also span many genres. He produces “beats” for rap artists, writes music for r+b and pop singers, composes world music for yoga, meditation, and relaxation, and records and produces singer-songwriters. He recently opened his own studio called Old Bull Studios.

Music ideal for yoga, meditation, healing, whenever the attention is directed inward toward that dynamic place of stillness. Features Jai Uttal chanting and on dotar and Manose Singh on bamboo flute. “This CD is musical prana that breathes life into the practice of yoga.” — Shiva Rea

The Spirit of Yoga