The Spirit of Yoga 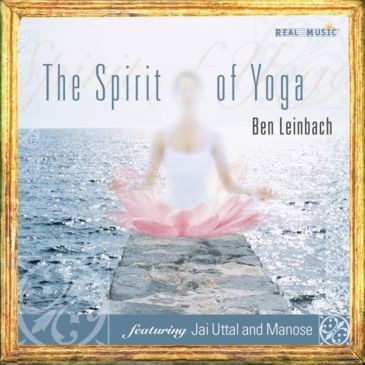 The Spirit of Yoga by Ben Leinbach

Music to ease stress away and promote peace of mind. Ideal for yoga, meditation, healing. whenever the attention is directed inward toward that dynamic place of stillness.

While the yoga angle is an important hook, this spiritual set moves beyond the pale with Jai Uttal involved in the music as well. A sweet introspective and versatile set, you don't need to only be into yoga to enjoy this in your headphones or during an hour long massage, which it's perfectly programmed for. Far from the namby pamby stuff that gives many people fits, this is meaty music that wins by sneaking up on you and is a great antidote to over stimulation. A great next wave outing.

Spirit of Yoga, from Ben Lienbach, features an hour of soft, flowing music that fits well with yoga practice, meditation, or any sort of healing practice where a calming atmosphere is desired. Harmonic synthesizers are joined by the tranquil, improvised bamboo flute playing of Manose Singh and the subtle vocal textures and chants of Jai Uttal. Also filling out the soundscape are light drone instruments, bells, chimes, and other Asian-oriented sounds. The music is expansive and introspective; the music flows at the speed of breath. This is an ideal recording for helping a person find the stillness within.

A gift of precious serenity for any meditator or healer. Leinbach composed all of the music and plays synthesizers, harmonium (reed organ), acoustic guitar, bells and chimes, tamboura (Bulgarian fretted lute), and sound effects on the album. Jai Uttal does vocals and plays dotar (an Iranian, two-stringed, long necked lute), Bond Bergland plays electric guitar, and Monose Singh's incredible bamboo flute weaves magic throughout. The dreamlike drone and the mystical flute will soothe and comfort you, if it doesn’t send you right out of your body! The Spirit of Yoga might just as well have been named Music for Astral Projection. Great album!

Weaving the lush, reverberating, meditative expanse of tasteful electronic backdrops with the exotic and evocative voice of classical Indian music, Ben Leinbach captures a truly majestic soundscape for releasing the mind and body. With the beautiful, haunting calls of bamboo flute and dotar, mixed carefully with solid new age fusion, this album succeeds in its aim to resonate with the spirit of living and promote peacefulness. A perfect tool for meditation, yoga, bodywork or simple relaxation at home, unwinding from the day.

The Spirit of Yoga, from Ben Leinbach, features an hour of soft, flowing music that would fit well with yoga practice, meditation or any sort of healing practice where a calming atmosphere is desired. Harmonic synthesizers are joined with the tranquil, improvised bamboo flute playing of Manose Singh and the subtle vocal textures and chants of Jai Uttal. Also filling out the soundscape are light drone instruments, bells, chimes and other Asian-oriented sounds. The music is very expansive and introspective; this is an ideal recording for helping a person find the stillness within.

These compositions for yoga practice, created specifically for master yogini Shiva Rea, are some of the finest that I’ve heard. The ecstatic chanting of Jai Uttal punctuates incredibly resonate and lush backdrops created from seamless blends of tamboura, synths, and harmonium. Acoustic and electrical guitar, bamboo flute and minimal percussion are generously sprinkled throughout giving the pieces texture and form. The Spirit of Yoga effortlessly draws one’s attention deeply inwards for yoga, meditation or other healing and spiritual practices

When I think about the advantages adults have today as opposed to maybe fifty years ago my mind instantly starts racing, tabulating this list of resources that we have to help us feel a bit more comfortable in our skin. This CD combines two of those fast track remedies on the road to peace of mind — Yoga and Ambient/New Age music. Sure yoga can be traced back to almost the beginning of civilization and Ravi Shankar and Paul Horn were doing their New Age music long before it became fodder for Reverse Osmosis purified water cooler talk. But you can lead a horse to water! I guess the difference is some of these resources serve and create almost religious experiences for some — they are as regular as breathing. Ben Leinbach who got the music bug long before most kids learn to tie their shoelaces has always looked at music as a barrier free medium for expressing emotion and spreading peace. This album serves as Leinbach’s musical resume — if all his life lessons have led him to making this album he serves as a great spiritual navigator. Listening to The Spirit of Yoga will instantly lower your shoulders, you could find yourself breathing deeper at the very least the album will gauge your speed. Nothing speaks to us louder about our own chaos than slowing down and feeling the difference. Leinbach plays the synthesizer, harmonium, guitars, bells and chimes while Grammy nominated Jai Uttal harmonizes and chants lightly in the background. The Spirit of Yoga also features the Bond Bergland on guitar and Manose Singh on bamboo flute. The album features four long tracks that fit perfectly together never breaking the mood for any peaceful activity like meditation, contemplation or simply in the background as a gentle break in your pace. I receive at least fifty relaxation New Age albums every month and most are good, but this one is great.

Composed specially for ashtanga yoga practitioner and vinyasa flow yoga teacher Shiva Rea, The Spirit of Yoga is designed to ease stress and promote peace of mind. Over an hour in length, its four extended tracks breathe a seemingly unending flow of balance and reverence that is quite magical and transporting.

Leinbach, a music major who initially specialized in drumming, performs regularly in jazz, rock, blues, funk, pop, and Latin-jazz genres. Having played with the likes of Chick Corea and Joshua Redman, he currently engineers recordings ranging from hip-hop to jazz, and operates his own Old Bull Studios in San Anselmo, CA. Leinbach’s wide range of influence can be heard in his ultra-mellow music, which mixes Far Eastern harmonies with just enough jazz and blues inflection to distinguish it from the pack.

The composer, who performs on synthesizers, harmonium, tamboura, acoustic guitar, vocals, bells, chimes and sound effects is joined by Grammy nominated Jai Uttal on dotar and vocals, the immensely talented bamboo flute master Manose Singh, and Bond Bergland on electric guitar. This music doesn’t simply promote relaxation; it encourages you to unite with the inner oneness from which all true meaning flows. Highly recommended.