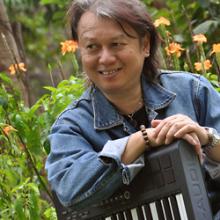 Rasull Soon a.k.a. BlueMonk is a seeker of spirituality and has a keen sense of expressing it through music. When he was in his early teens he bought his first guitar and started strumming  and singing his favorite tunes. He is a self taught musician in respect of learning the art of music. Shortly after he studied classical guitar and this helped in furthering his knowledge of music theory and structure.

Spiritual endeavor, music creativity and a broad understanding of electronics has always been a way of life and passion for Rasull and these three competencies have molded and shaped him into the artist he is today. He studied microprocessor electronics after leaving school by attending a  technical college and worked as an electronic technician as a career for several years. His enthusiasm in electronics as a hobby led him to experiment and build effects for his guitar, make a simple keyboard synthesizer and drum machine so he could play accompaniments and begin the art of composing and arranging.

He composed his first composition entitled ‘Let there be Light’ and it was subsequently selected for the finals of The World Peace Song Kite Festival held in Malaysia in the mid eighties and was nominated as first runner up in the competition. He received a letter of appreciation from Hyatt Regency Saujana Kuala Lumpur for outstanding performance and dedication that contributed as a key factor in them receiving The Millennium Gold Award 2001/2002.

In 1998, he stopped performing live and ventured into music production with a prominent Jingle and recording studio, Betarecs , for three years. During that time his composition abilities developed and improved tremendously. He composed hundreds of TV and radio commercial jingles and numerous songs for a few local artists. He also received the bronze award for best sound design in Malaysian Video Awards in year 2000 and a gold in 2002. During these years at the production house, he had used computer based hard disk recording technology – Digital audio Workstations, worked with samples and loops on his composition works.

In 2005 he ventured into new age and electronic ambient music and showcased them on several promotional websites. In early 2008 his music was heard by John Rawsthorne of Ninewells Music and two meditation music projects were discussed. It was a complete break through for him as his inborn spiritual seeking personality finally found a meaningful foundation where he could actually express his inner passion in creating music that he loved and cherished the most.. Working with John and Rajendra has opened up new dimensions of creating, composing and arranging high quality professional meditation music that is often overlooked or taken for granted in majestically tranquil, calm and beautiful gems of musical composition.

In June, 2011, Rasull Soon signed with Real Music. His first release in the United States is Enlightened Love, a collaboration with late producer John Rawsthorne and renowned flautist Rajendra Teredesai of Pune, India, that has expanded the boundaries of new age, healing meditation and ambient music.

Music, the vibrational force that attunes and harmonizes with your inner and outer universe.