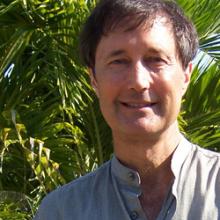 After years of working with various well-known musicians, talented pianist, composer and songwriter Brian BecVar steps into the spotlight on his own. Born and raised in Louisville, Kentucky, Brian began training in classical piano at age eight. He graduated from Duke University with a degree in psychology in 1976 and soon after was invited on a three-year U.S. and European tour with then emerging rocker John Mellencamp. One year later, the John Cougar album was released on the Mercury-Polygram label with a song written by BecVar and Mellencamp called “Pray For Me”. In 1980, BecVar had a one-year stint in Miami with a funk group called Wild Cherry. After moving to Los Angeles, his career took off as he began writing songs and touring with such artists as Roberta Flack, Bobby Caldwell, Celine Dion and Laura Branigan.

BecVar has a unique style of instrumentation whereby he filters the sound of strings and voices through a MIDI grand piano to give the music an extraordinarily rich, textured sound spiced with a South American flair inspired by extensive travels in Venezuela, Peru, Brazil and Chile. It was there BecVar gained a deep appreciation for what he calls “the wonderful rhythmic feeling of Spanish countries.”

Brian’s far-reaching experience in the pop music realm shines through on Once in a Life where he reveals his knack for composing romantic pop melodies for collaboration with some of the industry’s top talent — Dave Koz on sax and electronic wind instrument, Jimmy Haslip of the Yellowjackets on fretless bass, brother Bruce BecVar and John Defaria on guitar, Pedro Aznar and Nada Shakti on vocals, Brad Dutz on percussion and Ralph Rickert on flugelhorn. Highlights on the album include “If Tomorrow Comes,” a powerful piano sweep through the Andes mountains that opens both this album and Real Music’s Sampler Take One. “The Tears of Machu Picchu” with Dave Koz on sax and Bruce BecVar on guitar is a steamy and heartfelt tale of passion in Peru while “The Midnight Ride” (with Brad Dutz and Pedro Aznar) beats with the intensity of recapturing love lost.

“Once in a Life is inspired by the belief that our greatest fulfillment happens when we are fully present in the moment, for each moment is experienced only once in a life,” says BecVar. He adds,“I would be rewarded if people were energized by the music and came away with peace and tranquillity from the melodies and a celebration of life through the rhythms.”

Once in a Life