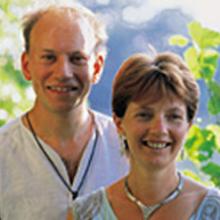 Ceredwen (ker-ED-win) is comprised of the duo Renée Riach and Andrew Fryer. The name comes from the Celtic goddess of inspiration and legendary mother of Taliesin, King Arthur’s bard and “Keeper of the Cauldron.”

Renée Gray was born in a small village in South Wales and brought up in Brynaman, a village at the foot of the Black Mountains. Welsh is Renée’s first language, and all of her family speak it. Born into a family steeped in the arts and encouraged to sing and perform, Renée learned to play piano and guitar and has competed since the age of five in local and National Welsh Eisteddfod. She was educated at Aberystwith University and for the past ten years has been a singer, guitarist and keyboard player with The Lucy’s, a folk-rock band performing Welsh, Irish and English folk songs and tunes.

Andrew Fryer comes from a distinguished English lineage with ancestors who include de Bayeux, arriving in Britain in 1066 and Knight at the court of “William the Conqueror” and Edward Juby, an actor in William Shakespeare’s company at the Globe Theatre in London around 1600. Andrew’s grandfather, Arthur Juby, is a member of the “Ancient Order of Druids,” Keeper of the Clock (Big Ben) at the Palace of Westminster, London. His immediate family includes members of the British Magical Society, the medical profession and the priesthood. Andrew attended Ipswich School (founded by Cardinal Wolsey, adviser to Henry VIII) and studied music with applied physics at Surrey University. He formed a folk band when he was thirteen and has been involved in music ever since. Andrew has worked as an independent record producer, written theme music for World Service and BBC Radio and is currently a songwriter for Warner Chappell Music in London.

Long ago, when Britain was known as the “Island of the Mighty,” the land was ruled by many different warrior tribes known as the Celts. Each night in the great halls up and down the land, storytellers recounted the heroic deeds of their kings and queens. These very ancient stories, precursors of the Arthurian legends, were called “Mabinogi” and were the inspiration for Ceredwen’s first release for Real Music, O’r Mabinogi.

All of the singing is done by Renee, which she describes as traditionally Welsh with its harmony, then combined with what might be called modern techno sounds plus a bit of folk. Andrew agrees their music is a collection of folk, classical, modern dance and singing. For O’r Mabinogi, Andrew recorded himself playing phrases on many of the original instruments (a lot of pennywhistle, flute and bodhran, a little uilleann pipes) and then sampled them for greater control. Renee wrote the melodies and the lyrics and then the two put their work together in the studio for an album acclaimed by reviewers and listeners alike.

“O’r Mabinogi is full of enchanting vocals, infectious rhythms and sparkling instrumental work. Many of the songs are uptempo with a myriad of percussion and rhythms — some may even entice you to get up and dance... a release brimming over with originality and musical daring..." — Bill Binkelman, Wind and Wire.

O'r Mabinogi: Legends of the Celts