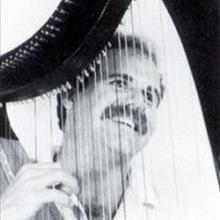 With a high school band sousaphone background, Hilary Stagg (named for Sir Edmund Hillary, the famous mountaineer) was an electrician when in his mid-twenties he attended an Andreas Vollenweider concert. He was enthralled, and so inspired that he purchased a small harp. It was a delightful challenge for him to use his knowledge as an electrician in amplifying the instrument and his custom amplification was superb. He tried formal lessons but quickly decided he would learn to play the harp a different way. Hilary believed in and practiced lucid dreaming and developed a way of dancing with the Muse in his dreams, a way of exploring and composing music in his “sleep” that became the core of his compositions. As he experimented, Hilary developed a gentle, yet powerful, melodic style that gave new meaning to soothing and relaxing music. He began performing regularly, refining his technique and confidence. The results of his labor and dedication can be heard on seven titles for Real Music, Beyond the Horizon, Feather Light, Dream Spiral, The Edge of Forever, Winter Magic (Christmas selections), Sweet Return and finally, Hilary Stagg — A Tribute.

“When I first heard Hilary’s music,” says founder and president of Real Music, Terence Yallop, “I kept it playing all night. It has a unique rhythm, perhaps best described as a spiral.”

Hilary had worked as a commercial diver in the North Sea, spending many, many hours underwater. He was also an avid scuba diver, so it’s not surprising that Hilary’s music is akin to floating in the ocean, wave after wave reflecting the spiral of life as our planet moves through the heavens. This is undoubtedly why Hilary’s music is so perfect combined with the magnificent underwater footage on Starbrook’s video, Real Sanctuary.

As he played and spoke about the harp, it was obvious that Hilary had tremendous respect for the instrument. “There is something about the harp that captivates not only the listener, but reaches a part of me as well that is difficult to describe or understand,” explained Stagg. And when you listen to his work, it seems inconceivable that Hilary Stagg’s musical journey was relatively brief. With fan mail pouring in regularly from a devoted following, many describing their healing experiences with the music, it's clear that Stagg’s unique sound has a profound effect upon people no matter what their musical tastes may be.

Hilary died suddenly after a brief illness in June 1999. His music is our gift, ready to comfort and uplift at the touch of a button.

BUY NOW
The Edge of Forever

BUY NOW
Beyond the Horizon