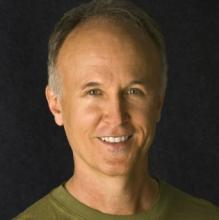 Tracking Jim Chappell’s artistic development over the course of his multi-faceted career proves a rewarding study of true musical evolution. Since the independent release of his breakthrough solo piano collection Tender Ritual in 1986, he has become one of contemporary instrumental music’s most engaging composers and performers.

Chappell’s musical education developed through trial and error, with the greatest strides coming after leaving his native Michigan and traveling through various regions of the United States. Early stints writing pop tunes in Nashville and playing piano improvisations at the University of Oregon were fruitful, but “didn't capture the soul of my music,” he says. “It was then that I realized that the free-flowing music I played when I came home after meeting with publishers was what I should be doing full time,” Chappell recalls.

“When I make an album,” Chappell says, “all I've ever done is create material as it comes to me. I'm not really in charge of that. As a creative person, you're working with something much greater than yourself.”

Laughter at Dawn is wonderfully reminiscent of Jim’s early days as an acoustic player, composer and improviser. Indulging a more personal, private side of the artist, he says the music "shows the part of me that likes to play alone. I love playing solo piano, and it will always be a part of my music.”

Chappell is also the featured artist on Volume 1 of the EarthSea Series. This cheerful album accents Chappell’s signature acoustic piano melodies with an exploration of synthesizer and percussion sounds that are sprinkled with flute, guitars, sax and electric bass. Real Music’ launched this special collection of recordings for the purpose of protecting and preserving the environment, giving featured artists the freedom to choose the environmental issue of importance to them. Remembering fond childhood memories of summers spent in Michigan’s lake country, Chappell has chosen the state’s Tip of the Mitt Watershed Council. Jim and Real Music are donating 15% of the proceeds to Tip Of the Mitt, an organization committed to the protection of northern Michigan’s water quality through education, advocacy, research and technical assistance.

Jim Chappell albums available from Real Music include The EarthSea Series: Volume 1, Laughter at Dawn, Living the Northern Summer, Dusk, Tender Ritual and Nightsongs and Lullabies; jazz albums include Over the Top, Manila Nights and In Search of the Magic.

BUY NOW
In Search of the Magic