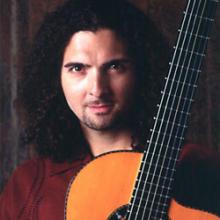 “Performing is like meditation,” Linstead says, “With total mental, physical and spiritual concentration, the music emerges pure and without restraint. It's heaven.”

A slice of heaven is delivered to listeners each time the evolving, self-taught Toronto, Canada, guitarist performs his original compositions with virtuoso speed and brilliance. In addition to his mastery of the Spanish guitar, Linstead is also an accomplished pianist and performs instruments as diverse as the bazouki, wood flute, mandolin and bass.

Linstead’s work is deeply rooted in the South American and Caribbean cultures he experienced while on a spiritual journey of personal and artistic awakening. Influences from his travels to Spain, the Caribbean Islands and Latin America shaped his profound respect for life and moved him to create new musical soundscapes. It is his eclectic fusion of virtuoso fretwork, global rhythms and intriguing instrumentation that keep Johannes’ music fresh and alive.

Linstead’s music combines the familiar stylings of classic flamenco, gypsy, salsa and Brazilian with infectious contemporary rhythms and hypnotic melodies. And while his compositions are innovative, the recognizable energy and mood of Spanish guitar emerges as it subtly merges with piano, horns, flute and percussion.

Sol Luna Tierra (Sun, Moon, Earth) marked his debut as a solo recording artist as well as his premiere with Real Music. The album achieved top twenty on Billboard’s New Age Chart. Kiss the Earth, another Billboard charting success, followed, with new elements including the Greek bazouki, Arabic dumbek, udu drum, cello and vocalizations. Guitarra del Fuego, his third release and most international and innovative album to date, was awarded "Best Contemporary World Album of 2001 by New Age Voice and achieved the #6 position on Billboard’s New Age Chart. On this album Linstead is joined by twelve musicians from around the world, including violinist Vasyl Popadiouk from Ukraine, Alexis Baro from Cuba on trumpet, palmas by flamenco dancers Liliana de Irisarri from Colombia and Sonia Bibershtein from Russia, dumbek performed by Amer Matri of Lebanon and vocalizations by Alla Kadysh from Russia. The song that perhaps best embodies the eclectic and international flavor of the album is "Los Moros," a song with Middle Eastern tones and flamenco fire featuring musicians from six countries. Rhythms on the album include Cuban rumba, salsa, cha cha cha and guajira as well as world rhythms and even a samba — all based around the nouveau flamenco sound.

On the personal side, Johannes’ music is based on a strong foundation of spiritual practices that include Kundalini Yoga, Reiki Level I and II attunements and Shamanism, alongside many years of meditative practice. He is also trained in and teaches Kung Fu, Tai Chi and Qi Gong, speaks conversational Spanish and German, enjoys spending time in nature and writing.

Integrating sublime melodies with technical virtuosity, Linstead wows audiences as he performs throughout the United States and Canada, often pushing the capability of the guitar to its limit.

His fourth recording (Zabuca) since 1999, Linstead shows no sign of slowing down or running out of ideas and all without a sophomore slump. I was fortunate enough to meet this man in person during an in-store appearance. His guitar playing was breathless to say the least and apparently easy to accomplish. Well, he made it seem that way as his fingers fluttered all over the frets without any posing or any indication of being stressed. The man is an accomplished guitarist and to add to that a very nice guy as he patiently signed my CD booklets... Linstead whisks us away to exotic lands via upbeat songs of celebration or somber compositions of reflective romantic ballads with great ease.  —Michael Debbage, WindandWire.com, 2003