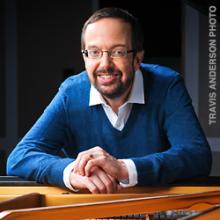 When Real Music President Terence Yallop heard carols being played one Christmas Day at a hotel in San Francisco and approached the pianist, he was excited about both Kevin’s talent for exceptional arrangements and for his pianistic skill. He didn't yet know that Kevin had been a child prodigy who was discovered, hands on the keyboard over his head, playing “Silent Night” when he was only 18 months old and that by the time he was two, Kevin could play 20 Christmas carols using both hands.

When Kevin was a child, he watched the world series on television and then replayed the emotion and excitement of each inning for his father who had been at work and unable to watch. This not only fed a passion for baseball (“I live and die for the summer games”) but honed Kevin's talent for “sound painting,” something which fed the creative collaboration between Kevin and Terence. This collaboration has resulted in seven albums for Real Music to date — In the Enchanted Garden, Beyond the Sundial, Summer Daydreams, In My Life, Embracing the Wind, More Than Words (a “best of” compilation with two new tracks) and the June 2003 release, The Winding Path. All have achieved top positions on Billboard's New Age Chart.

Born in Detroit, Kevin began studying with a private tutor at age four and made his professional debut at 14 with the Well Tempered Clavichord, a teenage casual group of which he was a founding member. Though Kevin felt obliged to question his career direction as a teen, briefly wondering if he might like to be a poet, the joy of making music won the day.

Kevin studied under Detroit Symphony pianist, Mischa Kottler, and attended the University of Michigan School of Music. He has also attended the New England Conservatory of Music, receiving a Bachelor of Music as well as a Master’s Degree in Performance. He spent several years playing in and around the Boston area before moving to San Francisco in 1990, where he began performing at a variety of live venues. His unique approach and ability to communicate earned a spot on the faculty as a theory teacher and vocal accompanist at Jazz Camp West in Santa Cruz in 1992, 1993, 1994 and 1998.

Some say Kevin's compositions can be compared melodically to classical music and wonder which composer's music influences him most. Primarily Bach's, which Kevin says is like the pyramids; the stones, or notes, fit together without mortar.

Terence says, "One of the joys of working with Kevin is his ability to create a picture in his mind and translate it into an exquisite melody. If I say 'meadow,' Kevin paints a sound meadow with all of its resonant beauty.” Kern considers himself a sensualist and likes having Terence suggest a mood or scene for him to describe musically. Because Kevin lives in a world that lacks the crisp detail of the fully sighted, his powers of concentration and description through music are intensified. Many of his compositions are filled with the sights, sounds and scents of the natural world — of gardens, mountains, the ocean and all of their soothing, healing, comforting and uplifting qualities. Kern says, “To think that my music is touching people I’ve never met and from all over the world is such a joy. Bringing this kind of music to others is what my life is really about.”

Kern recently returned from another triumphant tour through Asia where sold out performances, including one at the beautiful new Esplanade Theatre in Singapore, led to encores and standing ovations. Audiences in Korea broke into enthusiastic applause each time they recognized the beginning of one of his much-loved compositions. Kern has truly become a universal name for beautiful, relaxing music.

Real Music has released eleven Kevin Kern albums — the latest Always Near – A Romantic Collection, Enchanted Piano, Endless Blue Sky, Imagination's Light, The Winding Path, More Than Words, Embracing the Wind, In My Life, Summer Daydreams, Beyond the Sundial and his debut album and international favorite In the Enchanted Garden. Three songbooks are available — Imagination's Light, Kevin Kern Piano Album and In the Enchanted Garden.

Always Near - A Romantic Collection

BUY NOW
In My Life

BUY NOW
Beyond The Sundial

BUY NOW
In The Enchanted Garden

A collection of 28 songs, 178 pages, originally released in South Korea.

“For many years I have dreamed of being able to share the joy I feel when making music. Now that dream has become a reality with the publication of this songbook. I sincerely hope that you will enjoy many joyful hours, either alone or with friends, with this collection of piano arrangements of my favorite original compositions. Creating music is a gift that I am grateful to share with all of you. Peace and Blessings.”  —Kevin Kern

This product's shipping cost is slightly higher due to weight/size restrictions.

A collection of all of Kern’s original music from his seventh Real Music CD, Imagination’s Light.

“All my life, I have drawn inspiration from the joy of sitting and playing a piano in a darkened room. There is something remarkably pure and uncomplicated about a world consisting of nothing but sound and sensation. When we turn out the lights in the studio, I begin to feel that undiluted creative energy that has been such a part of my life from the beginning.”  —Kevin Kern

This product’s shipping cost is slightly higher due to weight/size restrictions.