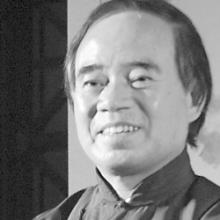 Professor Li Xiangting is acknowledged as one of the most important guqin players of his generation and a distinguished Professor at the Central Conservatory of Music, Beijing. The guqin, a seven-stringed zither-like instrument producing over a hundred harmonics, dates back well over 3,000 years to the origins of Chinese music. By the middle of the twentieth century the guqin had become relatively unknown, with fewer than three hundred living guqin musicians. Since then, and due in large part to Li Xiangting’s teaching and performing, the ancient art of seven-stringed guqin playing has re-emerged.

He began his qin studies in 1957 as a student of the qin master Zha Fuxi and was accepted as a student at the Central Conservatory in 1958, studying under the qin master Wu Jing-lue. Both Zha Fuxi and Wu Jinglue are considered to be two of the greatest qin players of their generation. Upon graduating in 1963 Professor Li began teaching at the Conservatory, eventually taking over the position of Wu Jing-lue. He is also Vice President of the Beijing Qin Research Association and advisor and consultant to the North American Guqin Association. Professor Li began improvising on the guqin in the late 1980s, and says his improvisation can be traced back to his xiao (vertical bamboo flute) playing. Finding that few xiao pieces could express his emotions sufficiently, he began revealing his heart through improvised songs. After mastering hundreds of ancient pieces on the guqin, involving hundreds of difficult skills, Li Xiangting felt confident to improvise on that instrument as well. Improvisational guqin music, once an important part of guqin playing, died out over a thousand years ago. Professor Li has rescued this lost art and on Sleeping Lotus he performs eleven serene guqin and xiao improvisational tracks with translucent emotion and true mastery of his instruments.