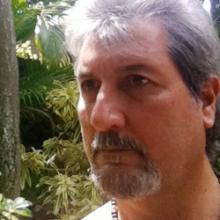 “New York when I was growing up was amazing. You could feel the creativity in the air, and the music scene was absolutely extraordinary. I studied guitar, saxophone, sang in the choir, played drums and percussion. When my friends and I weren’t going to see Jimi Hendrix, Pink Floyd, Buddy Rich and other jazz greats playing in Greenwich Village, we might find ourselves in a tiny club in Harlem discovering the incredible musicians there. These experiences opened my mind and when the Beatles and others began including Eastern instruments like sitars and tablas, the entire world became a palette for sounds,” says Mark Ciaburri.

In New York Ciaburri worked at a large advertising agency where he learned to produce multimedia presentations for large corporations, a trade in which he continues to be successfully engaged today. He says, “Traveling around the world producing and staging multimedia extravaganzas is very exciting and a wonderful opportunity to be creative and earn instant gratification!”

In the early 80s, Ciaburri spent much of his time with an Indian teacher. About this experience, he says, “My whole being moved toward these teachings. I loved what I was learning, and unlearning.”

In 1990 Ciaburri moved from New York to the soft and fragrant tropical island of Maui, Hawaii, where he still resides. His commitment to a vegetarian lifestyle has led him to work on a cookbook titled, Guido the Vegan, in order to share the wonderful Old World recipes passed down from his Italian parents but translated into modern, vegetarian form.

Ciaburri created the album One to share with others “the experience of traveling to a place where thoughts just slip away, without having to pack a suitcase or leave home.” To join him on the album, he invited musicians he felt could support the journey. As the project was evolving, it became clear it was succeeding when a friend said, “This music brings me into meditation so easily!” Others began listening and entering the stillness and soon after, One to Real Music's award-winning catalog of relaxing and healing music. In 2007, Real Music released another beautiful island collaboration from Ciaburri he titled Tropical Meditation, featuring the chanting of Charles Ka'upu.

As busy and engaged in life and creativity as he is, Ciaburri is ever mindful of the great wisdom of Osho’s light teaching, “Don’t just do something. Sit there.”