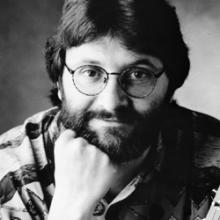 Max Lässer was born in Zurich and began his music career in the 1970s as a freelance musician mainly on the Swiss folk scene, playing in various folk-rock groups, writing songs and playing as guitar accompanist to singers. He started his career upswing in the 1980s playing with fellow Swiss musician, Andreas Vollenweider. Lässer has played many different types of music during his career and on A Different Kind of Blue, he allows his blues influence to shine through. "I've made a transition in my music," explains Lässer. “A Different Kind of Blue is a good description of my music. This album is very fresh. I feel I’ve arrived where I’ve always wanted to be musically.” The record continues  Lässer’s tradition of using acoustic instruments and features marimbas, guitars, reeds and flute. Many in his listening audience have written letters describing their experience. “My music centers people and brings them into contact with themselves through either imagery or clear thinking,” explains  Lässer.

Lässer is particularly active in the advancement of authentic Swiss folk music. He has increasingly turned his attention to the authentic folk music customs of his country, breaking new ground with his arrangement of traditional Swiss dances for the guitar. For this he has developed a unique tuning technique for his instrument, inspired by the leading English folk musician Martin Carthy. Lässer’s search for roots also led him to admire guitarist Ry Cooder, who shared a similar interest by researching his own musical roots. “The first time I heard Ry Cooder was about two years after I first picked up a guitar. I heard an old Captain Beefheart record, which was really quite weird to us in Europe," laughs  Lässer. “What struck me about Ry was how much energy he could put in one note. To me that's like a leading line to what I try to do. I'm not a guitar virtuoso in how many notes I can play; instead I try to put as much emotion into a note as possible.”

The title cut on A Different Kind of Blue was inspired by a poem by Indian artists Hyemeyohsts and Swan Storm. “As an artist, I want to point out certain things through my music. This album addresses the need for change in people's attitudes regarding the earth. As a society we need to respect life, recycle and not waste a lot of things and be cautious in how we treat the earth.”

A Different Kind of Blue