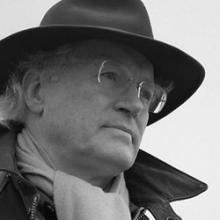 Composer/arranger/keyboard player Michael Hoppé (HAH pay) was born in England and now makes his home in Los Angeles. He has an extensive background in popular and classical music, both of which are reflected in his compositions. His music has been described as “piercingly romantic,” sensuous, tender, expressing depths of intimacy and longing and composed with an elegance seldom heard in today’s music. Listeners find his music deeply soothing and gently inspiring.

Michael Hoppé was formerly a senior executive at PolyGram, one of the world’s largest record companies and he is well known throughout the music industry in Europe and North America. At PolyGram he was responsible for bringing such diverse talents as Vangelis, Kitaro, The Who, Jean-Michel Jarre and ABBA to the label. He left this position in 1984 in order to compose, arrange and perform his own music. He has scored feature films such as Misunderstood (starring Gene Hackman) and the multi-award winning short film Eyes of the Wind which won top honors at the New York, Houston and San Francisco Film Festivals, as well as reaching the Oscar nomination short list.

Michael Hoppé is the grandson of the celebrated portrait photographer E.O. Hoppé (1878-1972), whose immense portfolio included all the leading figures of his day. When Michael first saw the more than 5,000 images in the 90s, they spoke to him across the years so eloquently that he was inspired to compose a number of works relating to specific photographs. Along with Michael’s keyboard, master flutist Tim Wheater’s alto flute is woven through these recordings (“The Yearning”, “The Poet” and “The Dreamer”) which have garnered high praise from critics and fans alike.

The Unforgetting Heart is an appropriately titled album of sensitive and moving piano melodies, complemented by the flutes of Tim Wheater and the viola of Harold Moses. As the title suggests, it is an album on the longings of the reflecting heart. Thomas Hardy’s novel Jude the Obscure, Alice Meynell's romantic poem Renouncement, the announcement of the birth of a friend’s child all provided vignettes for the album, which Hoppé hopes will also encourage the listener’s expression of his or her own heart's stories.