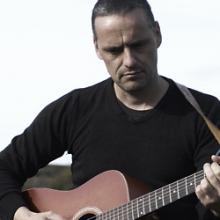 Mike Howe is a multi-instrumentalist composer, living and working, as an ecologist, in the Pembrokeshire Coast National Park on the south-western tip of Wales, a place where big Atlantic swells wash up on some of the most stunning beaches, cliffs and islands in the world. His music has been described as “humble, heartfelt and strikingly beautiful...and he has an incredible talent for composing and playing gentle instrumental guitar music that seems to flow almost effortlessly, carrying the listener away on soothing waves of melodic and catchy tunes”. Mike has been nominated in the Zone Music Reporter Awards for each of his 3 albums, starting with Best New Artist in 2009 for his debut album Time Stands Still, and Best Acoustic Instrumental Album for his follow up albums Round River (2010) and Island Of Anywhere (2011). Mike's influences span many genres of music, and the sound he has developed on the acoustic guitar, backed by keyboards, bass and drums, which he also plays, reflect folk traditions and conjure up emotive images of nature and landscapes.

Born in Liverpool, England in 1966, and growing up when the music scene was transforming so rapidly, Mike had fantastic opportunities to see the most amazing bands. In the 70's and 80's there were artists like Peter Gabriel, Steve Hackett, The Police and many others playing the Liverpool Empire virtually every week. “I was so excited and inspired by these bands that I knew I wanted to play the guitar.”

From then on he hardly ever put the guitar down and taught himself to play, joining bands where he also played bass and drums, and loved every minute of it. “I’ve been singing and humming tunes all my life, constantly tapping away absent mindedly, much to the annoyance of others at times! And then I started to compose my own music and it was like a revelation, I was so excited, and even though I’ve now written lots of songs I still get a huge thrill every time a new one comes to me.”

Meanwhile Howe’s music continues to evolve. He has gained a reputation for “crafting warm, engaging lead melodies”, but he continues to present them in new and interesting ways. “For all the musicians that have claimed to pull music from nature, Howe puts them all to shame. Proving that his debut was no flash in the pan, this is an NAC guitarist that has chops and soul to spare and seems to be able to pull inspiration from a very deep well. This is must hearing for any serious acoustic guitar fan that wants nothing less than the real deal.” —Chris Spector, MidWestRecord.com.

Howe’s fourth album, Heading West is out now. His music is also featured on Journey to Wellness and Contentment, two compilation CDs from the Sacred Spa Music Series 2, as well as on the compilation Namaste Massage.