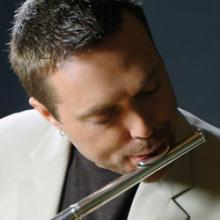 Once in a while a rare talent emerges in the competitive arena of contemporary instrumental music. Real Music recording artist Nicholas Gunn has planted himself firmly in the forefront of remarkable talent.

Nicholas Gunn’s formal training was as a student of the Royal School of Music in Rochester, England, Gunn's birthplace. It was there that he studied the flute and learned basic theory and music appreciation. When Gunn moved to Southern California, he began writing, producing and performing his own material from his at-home, state-of-the-art production facility.

Nicholas has enjoyed phenomenal success with his albums, which include Afternoon in Sedona, The Sacred Fire, The Music of the Grand Canyon, Crossroads and Passion in My Heart. With The Sacred Fire and The Music of the Grand Canyon both charting top ten with Billboard, flutist/multi-instrumentalist Nicholas Gunn rapidly became a genre icon. Expressing his deep regard for the land, its spirit and the essence of human dignity, Nicholas Gunn reveals himself to have evolved as a true pied piper in the field of contemporary instrumental music. His love of the Southwest lent itself perfectly to The Music of the Grand Canyon, part of Real Music's National Parks Series. The Music of the Grand Canyon captures the extraordinary contrasts and voices within the ancient walls of the Canyon. This is the music of the trees and plants and creatures that orchestrate the living memory of what many feel is our nation's most spectacular national park. It is an odyssey of brilliant musical composition, sound effects (recorded on location) and some spoken word from Nicholas Gunn as well as Razor Saltboy, a member of the Navajo Indian Nation. Nicholas Gunn and Real Music donate 10% of the proceeds from the sale of this album to The Grand Canyon Association, a non-profit organization working closely on preservation projects with the National Park Service.

Gunn says his music is about everything in life that is good. “It is a reflection of where I picture the world to be, of everything in balance.”

“If it's possible to wear out the grooves of a CD, then I'm sure I'll do it. Sacred Fire is like a wonderful mental journey” — MO, San Diego, CA

“Crossroads is absolutely the most beautiful music I have ever heard. The music gives purpose to our soul's journey, very rich and alive. Thank you, Nicholas for sharing your exquisite music” — TS, Englewood, CO

Passion in My Heart

BUY NOW
The Music of the Grand Canyon