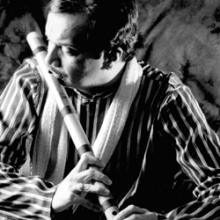 Rajendra Teredesai is one of the foremost ganda-bandh disciples of the most celebrated and internationally acclaimed flute maestro of all times— PadmavIbhushan Pandit Hariprasad Chaurasia.

He belongs to the grand musical heritage of the hallowed Beenkaar Maihar Gharana founded by Acharya Ustad Baba Allauddin Khansaheb, one of the greatest multifaceted musical geniuses of the 20th century, which has produced such great musical stalwarts as Ustad Ali Akbar Khan, Annapoornadevi, Pandit Nikhil Banerjee, Pandit Ravi Shankar and Pandit Hariprasad Chaurasia. Rajendra has also been groomed by the great grandmaster of the ancient and timeless dhrupad tradition of music — Ustad Sayeeduddin Dagar.

Highly accomplished academically, Rajendra is a graduate mechanical engineer, who has attended the MBA program in Sales & Marketing Management and an advanced course in Information Technology from California, U.S.A., and who also possesses a Post Graduate Diploma in International Business, in addition to a diploma in export management.

Rajendra Teredesai beautifully blends and integrates the most significant aesthetic and technical aspects of the gayaki and gatkaari ang of Indian classical instrumental music, combining it with a rich, sonorously soothing tone and immaculate blowing technique, displaying an amazing virtuosity, vivid with creative imagination in terms of elaboration and improvisational technique and design, in his woodwind playing. The raga is elaborated and improvised with deeply meditative alaaps, intricate jod and jhala, sweeping movements of meend, spontaneous and complex layakari ideation and badhat that depict sheer architectural built-up phraseology of playing. It develops further with a keen sense of anticipation on rapid movements after the creation of a melodic edifice out of the raga notes, carefully carved an etched from the breath of his celestial flute. The expansive alaaps, dynamic phraseology and finely crafted taan patterns, coupled with intense, animated and cathartic percussion based melodic interplays are the breathing elements of his music and characterise it with the spirit, hues and design of a vitalistic form. The style of his flute playing encompasses the whole range of genres covering the dhrupad, khayal, thumri and natya sangeet, that are fluidly integrated and assimilated into a style that is at once traditional and innovatively progressive in approach and presentation. Quintessentially, his music is like a bird in flight, swooping, hovering and maneuvering deftly on a heady and exotic combination of notes and time balance, meandering in search of newer dimensions of melodic and spiritual fulfillment in the seemingly unfathomable skies of Indian classical music.

Rajendra Teredesai's style also vividly displays an overpowering and unmistakable influence of the meditative, expansive profundity, repose and dignity of bearing of Ustad Amir Khan Saheb's gayaki and the sheer musical lyricism, deeply contemplative raga vistaar and exquisite sense of design of PT. Nikhil Banerjee, the two musical legends who, he states most humbly, have influenced him the most besides his own Guruji. Although having assimilated and imbibed these authentic and deep rooted influences, Rajendra earnestly endeavours to present his music with a distinctive individuality that is truly his own, which reveals itself in its shimmering emotive magnificence and melodic brilliance in his woodwind creations.

Rajendra is a graded radio artiste and has performed extensively in major music festivals, sangeet mahotsavs and sammelans in India and abroad. Rajendra Teredesai has toured extensively to several countries and continents including Europe, U.S.A., Canada, Middle East & South East Asia, and played jugalbandis and world music concerts with the santoor, sitar, violin, mandolin, guitar, jaltarang, piano and ghatam, to appreciative audiences worldwide.  He is also a visiting faculty and guest performer to prestigious foreign universities and music conservatories.

BUY NOW
Path of the Divine