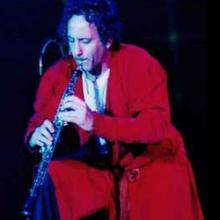 If you are one of those who relish musical passages with the uniquely lovely and sensual voice of the oboe, imagine the feast to be enjoyed when one of the world’s foremost contemporary masters of the oboe creates an entire album. The musician is Russel Walder, and his album is Pure Joy.

Russel Walder is a man of many passions — musician, actor, director, painter, writer — and he pushes the boundaries in everything he does. The oboe is little known outside of classical music and rarely played to its full potential and yet Walder has toured the world as a soloist, and his discography includes a composition on Windham Hill’s Grammy nominated, double platinum album Winter Solstice. He has recorded three albums with pianist Ira Stein for Windham Hill and Narada Records and guested with prominent new age artists Will Ackerman and Suzanne Cianni. On Pure Joy, Walder’s debut album with Real Music, he has composed music featuring the oboe that is passionate and expansive, soulful, yearning, intimate, and filled with radiant joy. Pure Joy may well be the world’s first pop album for oboe.

Every member of Russel’s Chicago family played an instrument and when he was ten, Russel heard the oboe and knew in his heart and soul that this was the instrument that was his. No matter that it is widely considered the most difficult classical instrument in the world to play. At 17, he joined the United States Youth Symphony for a world tour first appearing at Carnegie Hall. With a foundation of classical training and mastery of the instrument, he ventured into jazz at 20. Walder has studied with the legendary group Oregon and performed with such diverse groups as Afro-Celt Sound System, Yungchen Lhamo and Urban Tap from New York.

Russel had a starring role in the New Zealand Film Commission’s Lunatics’ Ball, which won the prestigious “Golden Cup” award special jury prize at the 1999 Shanghai Film Festival. His role was also notable for his oboe playing, which was also performed with the New Zealand Symphony Orchestra as part of the soundtrack.

In 1998, Russel founded Silent State, which is a platform for a soloist or in collaboration with distinguished guests. The music of Silent State has become a language all its own and includes North African chants, Middle Eastern harmonics, ambient soundtracks and lush arrangements. Silent State performed to rave reviews at Peter Gabriel’s 1999 Womad Festival in Auckland, New Zealand.

In his continual search to stretch the boundaries of performance, Russel created Power Spot, a fully improvised tour de force of oboe virtuosity over a pre-recorded set of powerful ambient soundscapes. As a New York Times critic put it, “At times you get the feeling that you are being hypnotized by a shaman with a sense of humor but you keep floating, flying and dreaming about distant deserts and nomadic tribes.”

Walder met Caroline Robinson, a New Zealand artist, when she was in San Francisco on her travels. She lured him to Auckland and matrimony, and Russel says, “When I put together everything I’ve done in New Zealand, I can see how being here has been absolutely necessary.” If the lush beauty of New Zealand helped provide the inspiration for this emotionally evocative and shining new album, we applaud the move.