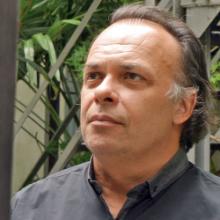 Internationally famous composer, director and producer Thierry David is one of the great names in new age music. Claude Challe, initiator of the Buddha Bar compilations, calls David one of the few French people to legitimately belong to the genre. On the eve of the release of his new work Evasions (released in France, May 2007), this talented creator tells us about several significant times in his life. Thierry David was born in Paris in 1955. Rather than quietly flow through life, David mapped out his daily life and planned his life’s path. During his early years he practiced the major pieces from the classical repertoire before discovering the freedoms of jazz while still a teenager. “For my parents,” he remembers, "this confirmed passion for music was only a hobby.”

Upon graduation from ESSEC, one of the prestigious business schools in Paris, he flew to Peru as a volunteer posted to the cultural service of the French Embassy in Lima. During this long stay on the other side of the world, David devoted most of his leisure time to music. When he wasn’t playing with Peruvian musicians he was composing his first melodies, inspired by traditional classical music and enriched with departures into jazz and excursions into the South American repertoire. A great traveller who stayed in remote regions for long periods at the drop of a hat, David succumbed to the charms of the Andean melodies.

“Rather than rush into a diplomatic or business career, I attempted the entrance exam for Berkley College of Music in Boston," he says, and was accepted into this prestigious institution. “It was a very hard school that demanded a genuine personal investment. You had to work 15 to 18 hours a day. The less passionate soon gave up, a sort of natural selection process,” he reflects today with the necessary distance. “On my return to France, I thought my education in business and music would open the door to a major record company but nothing I did in this way succeeded and eventually I accepted a job as head of advertising with the ad agency Grey. We were managing huge budgets and for fun, I enjoyed composing jingles that only I listened to. In advertising, roles are divided between commercial and creative and each has its place,” he comments. “One day, I don’t really know how, I was listening to something that I had created for a new campaign for a famous brand of underwear. It was accepted. To avoid an awkward situation and make things more clear-cut, I handed in my notice and threw myself into my music. From there, I did everything — played in piano bars, gave piano lessons, accompanied jazz groups, rock groups, heavy metal groups and more. Over time I signed my first music commissions, first radio jingles and, above all, gained in experience. A trained pianist, I learnt to create my own sound and clearly preferred creating my own musical world.”

With this clear view of his art, Thierry David fully invested himself in the burgeoning venture Koka Media, which is today recognised as one of the great musical catalogues. “The label enabled me to work with other musicians” he says, quoting a medley of names from the percussionist Steve Shehan to the guitarist N’Guyen Lé. “These have been genuine companions on my journey, artists with whom I have often worked since." David says of his musical style, “When my first commercial record Human Inhuman arrived on the shelves in FNAC, it crossed many different styles (classical, jazz, Indian, opera…), a blend of instrumental music that could be enjoyed both as relaxing background music not really needing attention or listened to more intently. Since the appearance of lounge compilations, we talk of ‘lounge music,’ which suits me as long as beyond the apparent simplicity of the compositions, there is recognition for the high degree of precision exercised by the one who takes care over the results, spending time adjusting the sounds, blending them and refining the arrangements of his compositions.”

Thierry has released five albums with Real Music, Zen Pause (2007), Zen World (2008), The Veil of Whispers (2011), Stellar Connection (2012) and now Hypnosis (2014). He has been nominated three times by Zone Music Reporter in the Best Chill/groove and Best Ambient categories. In his new release, Hypnosis he continues to explore the balance between accessibility and experimentation with wonderful effect.

BUY NOW
The Veil of Whispers