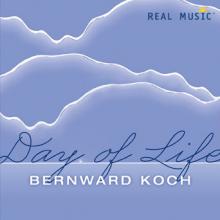 Recently Real Music artist Bernward Koch sat down with mwe3.com. Read about his new album, Day of Life, musical influences, equipment, and plans for the future. The article at mwe3.com.

mwe3: Where are you from originally and where do you live now and what do you like most about where you live now?

Bernward Koch: I was born in Siegen, NRW, Germany, the birthplace of the painter Peter Paul Rubens, and I grew up in a small village nearby. Today I still live in that area, a smaller village in the countryside. I very much appreciate the silence and nature of the countryside and need it for me and my work.

mwe3: What was growing up like in Germany in the late 1950s and early 1960s? Was W.W.II still on the minds of the people there or by that time were the German people caught up in the postwar economic boom times?

Bernward Koch: Yes, the W.W.II was still on the minds of the people. Today my mother, who is 89, still tells me some stories about those awful times. And the economic boom was came more slowly to the countryside, but step by step we got a kind of economic miracle here too.

mwe3: What was your first exposure to music like? Did you have a musical family and what sort of music were you inspired by as a younger person and what role did music have on your decision to learn to play music? What was your music education like and do you still practice music to keep in shape? Bernward Koch: When I was twelve years old I start playing the bugle and trumpet in the local brass band. Later I began playing drums, guitar and bass, as an autodidact. At fifteen I got piano lessons. My father played the accordion and he loved many kinds of music. Later, I attended music seminars for improvising, jazz and rock and started studies at the academy of music in Cologne. But the most important thing, e.g. my very own musical handwriting, I have taught myself. I think you cannot learn the most important signature in art by a school. It’s good for craft, but you have discover the essence, sometime in yourself. Today I do not very often practice. As a professional musician you have always a lot of office work, unfortunately. I enjoy playing live on stage and during rehearsals with my bands and for composing.

mwe3: Your music is clearly inspired by European romanticism and Neoclassical music. How do you counter balance between the different styles in your music? Would you say your music is more Neoclassical, New Age or electronic space music inspired at its core and what instrumental music artists were you most influenced by?

Bernward Koch: I think my music is a combination of different music styles, inspired by many. I don’t have a description, not really, but normally I need a strong melody in a harmonious structure. I like a mixture of nature and electronic sounds, and the music always needs a breathing space.

My influences in instrumental music are Jerry Garcia and the Grateful Dead, David Gilmour and Pink Floyd, Joe Zawinul and Weather Report, John Coltrane, Miles Davis, Stan Getz & Astrid Gilberto, Oregon, The Beatles, The Rolling Stones and so many other bands and musicians, like Ravel, Debussy, Bach, Beethoven, Mozart... mwe3: Where was your recent album Day Of Life written and recorded and can you say something about how you made the recording? I heard that you really concentrated hard to get the right sound and atmosphere. Is there a cool story on how the album took the path from conception to completion and how do you feel Day Of Life fits in with your other albums?

Bernward Koch: I wrote and recorded Day of Life in my own studio in the house, an old school building, where I live. It’s actually always hard work to create a new album and I try to improve my work from record to record. While recording the tracks, while completing the tunes, I had sudden memories, wonderful childhood memories and wonderful memories of a few years ago, only just short moments. Well, we live in a hard world, but it’s good and important to find some sunbeams in your life. So I think that are all the tunes and melodies are prior innerly... Day of Life is, for me a logical advancement. Working on that album was in some cases like a rush.

mwe3: How did you become involved with Real Music and what do you think of the label’s musical philosophy? There’s a strong connection there between New Age instrumental music and “healing” music. Have you always been involved in musical therapy as your sound is so attuned to that stress reduction lifestyle and what Real Music artists do you enjoy listening to? Bernward Koch: My first record Flowing from 1989, was released by the Erdenklang label in Hamburg. They had good connections in the USA but I did not know that at that time. Anyway, a few years after, while my second album Laguna De La Vera was on the Billboard New Age charts in 1993, it happened that Flowing, with a new blue cover artwork, was rereleased through the Real Music label. It entered the Billboard New Age charts, according to Nielsen SoundScan, and after that Real Music offered me a record deal. I very much like the philosophy of the label. The focus is on the music, very important, so you can “feel free” as an artist. All the other things are a kind of coincidence, it has to be a fit automatically. I don’t think in terms like New Age or healing, but it’s so good to hear from fans around the world that my music helped they in different situations in life. I often need it for myself every day of life. I enjoy some of Real Music artists, especially Mike Howe and Kevin Kern. I put my soul in music, honest and real, and I think the people realize that it’s true.

mwe3: Can you tell us something about your musical equipment that you use on the Day Of Life album? And how about guitars? You play guitar but your primary instrument is still considered keyboards. I imagine you must have a range of pianos and electronic synth keyboards and guitars to draw upon. Do you follow all the latest advances in musical equipment technology?

Bernward Koch: For many years in my home studio I’ve used a Mackie 8bus mixing console (32.8), an old Lexicon PCM70 reverb that is still very important, a TC Electronic M350 reverb/efx, a Behringer MDC2100 composer/compressor and more. I very much like to work with digital pianos, although once I recorded a solo piano album called Montagnola only using a Yamaha grand piano. I use a Yamaha CP-50 stage piano and I’m looking forward to the new CP-4 and CP-40 and a Korg SG-1D, a Yamaha DX7II and a MOX6 keyboard, in addition to a microKorg, Roland D-50 and alphaJuno2, a Korg Trinity plus and EX-8000. As sequencer I enjoy working with Steinberg Cubase 7 (PC) with a few VST plugins like Padshop, Halion Symphony Orchestra, Retroloque, Omnisphere, efx and so on... Yamaha acoustic guitars and a Music Man Stingray Bass (20th Annivisary), Sonor percussion and drums, they are my neighbors, and exotic percussion instruments from around the world. Yes, I follow the latest advances in musical instruments, always very interesting.

mwe3: What role does mixing and mastering have in the final product and can you name some of the other people involved in the making of the Day Of Life CD?

Bernward Koch: Very important process. Sometimes I work with other people together, but for Day Of Life I did the whole work, composing, arranging and recording all my instruments. Important and suitable flutes were played by my wife Christiane, and mixed all together for the right feel. This time it was a special process to create the whole album, like a rush, so I think it has a real flow. The final mastering was made by Bay Records, Lafayette, California.

mwe3: When are you at your most relaxed and natural? What else do you like to do outside of music and do you have other special hobbies or is it all music all the time?

Bernward Koch: When I walk through a wide and silence landscape I feel relaxed, and when I hear the right music, playing live, too. I like airplanes, art and literature, “Strength lies in calmness”...

mwe3: What have you planned for the rest of 2013 and moving into 2014. Are you planning to write and record music for a new album or perhaps you have some new project in mind? What are your next musical mountains to climb?

Bernward Koch: I have a few gigs in the next month and a project with literature & music, too. From time to time I have musical ideas in mind. I always collect new songs for a new record. I hope I will climb the musical mountains higher and higher, for me and the audience. I'm promoting, as effectively as possible, the new album mainly here in Germany. I just got a request from Switzerland for using the “Irish Sun” track from the album in a film score for healing and so on. So I hope Day of Life will continue go one’s way.