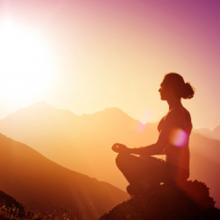 Everyone has heard that meditation, yoga, and prayer can lower blood pressure, lower stress, and provide other health benefits. A new study takes the health claims one step further, by showing that gene activity changes too. Scientists at the Massachusetts General Hospital in Boston wanted to show “the underlying molecular mechanisms that explain these clinical benefits.”1

This involved twenty-five healthy subjects with no prior meditation or relaxation technique training. These subjects underwent eight weeks of training with an experienced clinician where they were guided through relaxation routines, mantra repetitions, and mindfulness meditations. The subjects were also given a twenty minute CD to listen to once a day at home. Another group of subjects, who were long term practitioners of meditation and yoga, were also studied. These subjects did not receive any training from the clinicians.

Gene profiles were taken from both sets of volunteers before and after they began the relaxation and meditation techniques. After eight weeks of continued practice of the techniques, the tests were repeated. The results showed that beneficial genes became more active, and conversely, genes that can be harmful were less so. “The boosted genes had three main beneficial effects: improving the efficiency of mitochondria, the powerhouse of cells; boosting insulin production, which improves control of blood sugar; and preventing the depletion of telomeres, caps on chromosomes that help to keep DNA stable and so prevent cells wearing out and aging. Clusters of genes that became less active were those governed by a master gene called NF-kappaB, which triggers chronic inflammation leading to diseases including high blood pressure, heart disease, inflammatory bowel disease and some cancers.”2

“Both sets of subjects experienced significant changes, but those practitioners with experience had the most long term effects. "We found that the more you do it, the more profound the genomic expression changes," states Herbert Benson [one of the study’s main authors]. He and his colleagues are now investigating how gene profiles are altered and whether these techniques could ease symptoms in people with high blood pressure, inflammatory bowel disease and multiple myeloma, a type of bone marrow cancer.

Benson stresses that the relaxation techniques should only be an adjunct to conventional medicine and surgery, not a replacement.”3

Use (Benefit of this Music):
Meditation & Introspection