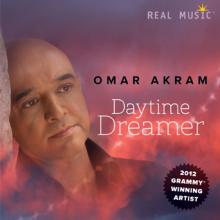 Recently Omar Akram was interviewed by Music Web Express (mwe3.com). If you're a fan, you'll love this in-depth conversation.

mwe3: Can you give some background behind the writing and recording of your 2013 CD Daytime Dreamer and what does the album signify to you and how does it compare with your other CD releases?

Omar Akram: Daytime Dreamer was recorded in a relatively short amount of time compared to my previous albums, in part because it contains a few previously released tracks. The new tracks do not contain many live instruments. I wanted to make the piano front and center on this project.

mwe3: Can you tell us about the other musicians who played with you on the album? Charlie Bisharat and Ramon Stagnaro, who add in violin and guitars, are well known session players. What was it like collaborating with the other musicians on the Daytime Dreamer CD?

Omar Akram: For the most part the music is written for the musicians, sometimes I ask them to improvise on certain sections. Collaborating with amazing musicians like Charlie, Ramon and Pedro makes the experience very enjoyable. mwe3: You had a colorful kind of childhood. I was reading one of your parents was a U.N. diplomat so how did growing up in so many different places impact your life and musical upbringing? Did you take in a little of this and that and blend the cultures all together?

Omar Akram: Yes, my family traveled to many different places because of my father’s work. We lived in Prague, Czech Republic, Havana Cuba, Paris France. I think my music is a combination of all these different cultures.

mwe3: You were born in New York? What’s your connection to Afghanistan and do you have fans back in the old country?

Omar Akram: Yes, I was born in New York City but both of my parents are from Afghanistan. I was the first Afghan-American to win a Grammy Award this year for my album, Echoes of Love. This made front page news in Afghanistan. I do have many fans over there. mwe3: How has your sound changed over the years and in what ways are you always looking for ways to improve the sound of your compositions and recordings? Do you still practice music and in what ways do you keep your musical senses sharp as it relates to playing and composing music?

Omar Akram: My sound keeps evolving as a composer, I think partly because of life experiences. For example, having my first child was a big influence. I still try practicing almost every day but more importantly I try living life and experiencing new things.

mwe3: What pianos, keyboards and other instruments do you prefer to play?

Omar Akram: On stage I play NORD Stage 2, I really like the piano sound and a grand piano if it’s available. I recorded Daytime Dreamer on a Yamaha C7 grand piano.

mwe3: What was it like meeting Fidel Castro in Cuba? In what ways were you influenced by Cuban music and other Latin inspired sounds? What other cultures have an impact on your writing and composing?

Omar Akram: I met Castro at one of my father’s diplomatic receptions. Cuban culture has influenced my music to a certain extent. I started to play the piano at the age of six in Prague, so European classical music has been a big influence as well.

mwe3: On Daytime Dreamer, you blend New Age inspired music with World Music and electronica too. How would you compare your influences from those electronic music styles with your classical influences? Omar Akram: When I was a teenager, I was very much influenced by French composer and electronic musician Jean Michel Jarre. I think some of that came through in Daytime Dreamer. I think my music is a combination of all of those genres.

mwe3: It seems like Real Music has always been at the forefront of healing New Age sounds and you fit right in with that New Age / beautiful music kind of sound. What other Real Music artists do you enjoy listening to?

Omar Akram: I am very fortunate to be working with Real Music from the start of my career. They took a chance on me and I really appreciate that. I enjoy listening to Kevin Kern and music of my friend Chuck Wild from Liquid Mind.

mwe3: Do other art forms inspire your music, such as movies, plays, books, paintings, graphic arts and how has the internet impacted your music and fan base? What do you do to relax with hobbies and other interests?

Omar Akram: Movies and paintings have inspired me the most. The internet has been amazing for my music, I have over 10 million hits on you tube! I don’t have very much time these days with my music career but every chance I get I love spending time with my 16 month old daughter.

mwe3: How are you planning to spread the word about Daytime Dreamer and what other plans do you have as far as writing and recording new music as well as live performances and other musical projects for the rest of 2013 and beyond?

Omar Akram: I am planning on doing more live performances and taking my music to as many people as I can. I am not really thinking about recording another album for a little while.