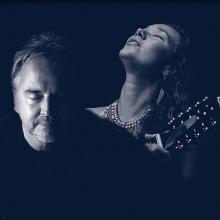 Grammy Winner, Peter Kater, is celebrating the release of his new album entitled She featuring archival songstress, Peia Luzzi, with a series of concerts through Hawaii and California. Join them at Unity (600 Palm Dr., Novato) in Marin on April 1 at 7pm. Click for tickets

"My life-long creative expression has been intimately and ultimately guided, informed and nurtured by my Muse. She is everywhere, in everything and everyone. A day doesn't go by where I don't seek Her touch, Her wisdom and the gift which She freely extends to me, sometimes in joyous revelation and other times through the fire of purification. This album is an offering and homage to the endless well-spring of inspiration and healing that She nourishes within me." —Peter Kater

Peter Kater is a multi-platinum selling pianist/composer who has released over 70 albums, scored the music to over 100 TV and film productions and 11 On & Off-Broadway dramatic plays. He’s toured all over the world including Carnegie Hall, The Kennedy Center, and the United Nations. He’s received dozens or awards and honors for his beautiful music including 12 Grammy Award nominations and a recent Grammy Win for his album “Dancing On Water”. He is also a proud recipient of the Environment Leadership Award from the United Nations.

Peia has gathered songs from ancient traditions that span across the globe. She carries melodies wrinkled and wise with time, laboring faithfully to revive their language, stories, and original essence.

“Peia’s voice soars like the wind as she sings a love letter to our Earth and an ode to Humanity.” —The Huffington Post 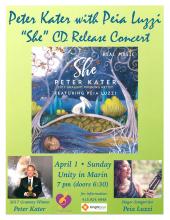