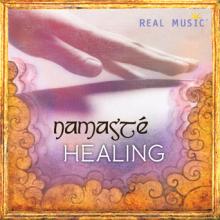 Our Namasté Series has sold over 80,000 copies and has become a classic with listeners throughout the world. The newest in the series, Namasté Healing, gathers restorative music in a meticulously curated compilation, carefully chosen for its acoustic resonance.

Here are some insights and comments from a few of the artists:

Featured in Real Music’s video for Namasté Healing is “Sparks of Love” by Frank Steiner, Jr. This track was originally recorded for Steiner’s album Into Forever. Steiner explains, “For this album I wanted to create music which is very calm and simple … like an acoustic perfume, a soft music fragrance to help one relax and unwind.”

“Whisper To Me” by Liquid Mind first appeared on the album Liquid Mind IX: Lullaby. For Chuck Wild the music came from a very personal inspiration, but with a similar result. “I wrote and recorded ‘Whisper to Me’ following the passing of my Dad at age 97. Emotionally that time in my life was a process of grieving and moving on, letting go the last of my immediate family, a process those of us lucky enough to live a longer life will all go through at some point. ‘Whisper To Me’ is designed to be very slow and sonically smooth, deeply relaxing, introspective, and meditational.”

Kevin Kern tells us, “‘And The Light Is Forever,’ was one of several spontaneous improvisations created as part of the Imagination’s Light album. All my life I have enjoyed a special bond with the piano. I have been legally blind since birth. Until comparatively recently my poor vision prevented me from composing music on paper for other musicians to play. This is why I have come to depend upon access to the very finest instruments to stoke my creative fire and help me to find just the right melodies for my pieces.

Playing just the right piano at just the right moment simply fuels my creativity indescribably. It brought back many memories of when the instrument was truly my closest friend. The result has been the addition of a number of spontaneously created pieces for many of my CDs, inspired in the moment by that special lifelong emotional connection I have with the piano. That emotion comes out in pieces like ‘And The Light Is Forever.’”

“Eternity” by Henrik Hytteballe (The Haiku Project) is a track from the album Flow, just released in April.

“I had a special story in mind when composing ‘Eternity.’ In his book Lifetide, Lyall Watson tells about being on a distant Indonesian island watching the turtles coming up on land to dig holes for their eggs. He wanted very much to see the giant leatherback sea turtle. The wise man, called a djuru, took him to the lagoon and while Lyall Watson was watching, the djuru started to splash his hands in the sea as if he were playing a piano.

After 20 minutes a giant turtle appeared. The djuru kept on moving his hands and began to sing a song in his old language. The turtle came closer and stopped just half a meter away, lifted its head and nipped the djuru’s fingers as gentle as a calf. Then it turned its giant body and disappeared into the big ocean again.

For me this is a beautiful example of a communication between species that cannot be explained in any scientific way, but takes place anyhow. Most of us just haven’t found out yet how to communicate with animals, but hopefully, as we all are connected, we may become wiser in the future.

Real Music has made a wonderful video for the track ‘Eternity’ following a turtle in the ocean. The video is just perfect, particularly given the story behind the song’s inspiration.”

The track “Divine Oneness” is from the album Divine Dimension by Rajendra Teredesai. Teredesai tells us, “’Divine Oneness’ is based on a traditional Indian raga. The composition is meant to facilitate a mood for deep reflection of the listener’s inner self, and detached contemplation of the universe outside.

The deep and rich tone of the bamboo flute and the accompanying music with its quality of spiritual repose also attempts to free the seeker from his day-to-day worries and transport him momentarily to a realm of inner peace and all pervading quietude.”