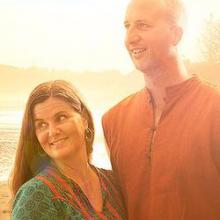 Real Music is excited to announce the re-release of four Sacred Earth albums. On February 18, 2014 Bahkti, Inyan, The Way Home, and Breathing Space will be available. These albums were previously released in Australia, however, we so believe in the beauty and grace of Sacred Earth's music we want to share it with a wider audience — including you!

Sacred Earth is the creation of Jethro and Prem Williams, who live in Victoria, Australia, and travel the world performing their music. Prem shares her heartfelt devotion for Spirit and our precious Mother Earth through mantra and songs from the heart, accompanied by her husband Jethro, who plays an array of instruments from around the world, including shakuhachi (Japanese flute), Indian bansuri, Irish tin & low whistles, acoustic guitar, and percussion. Occasionally Jethro adds his beautiful, soulful voice. Jethro and Prem blend their experiences of yoga, meditation, natural healing, voice, love of Earth and instruments from around the world, giving birth to the music they call Sacred Earth.

To learn more about Sacred Earth, click and read their bio.