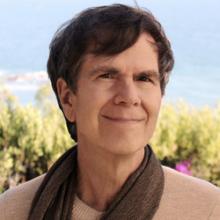 Liquid Mind® is the name used by Los Angeles composer, producer, and Emmy-nominated songwriter Chuck Wild. There are few composers with as much love for slowness in their music as Wild. Chuck draws from classical and pop influences as varying as Beethoven and Brian Eno, Bartok and Rachmaninoff, Bach, Chopin and Fauré, Duruflé and Brahms.

Early live and studio experience with the Capitol Records’ group “Missing Persons”, and studio work with Frank Zappa, Michael Jackson and many others have helped Chuck to develop high production values. Spending many studio hours over the years with five time Grammy winning engineer Bruce Swedien and famed producer Ken Scott has inspired Chuck to explore unique and subtle gradations of sound and feeling in his music. Chuck’s musical experience spans three decades, including writing 125 songs and compositions used in TV/Film and albums. The Pointer Sisters, Tommy Page, Timothy Leary, Wink, Jennifer Rush, Thelma Houston, Glen Medeiros and Philip Bailey are just some of the artists who have recorded his songs. Wild co-composed music with Michael Hoenig for the Emmy (TM) winning ABC-TV series Max Headroom. In 1992, his first composition for two pianos, Los Angeles Fantasy, was premiered by Zita Carno and Gloria Ching at the Bing Theater in Los Angeles. The same year, Wild co-scored the Academy Award (TM) winning film The Panama Deception. In 1989, he co-wrote (with Marti Sharron) the song "You're My One and Only," #1 hit in Europe for Jennifer Rush. Over the last twenty years, Chuck has lent his studio talents to projects with Michael Jackson, Paula Abdul, Missing Persons, Philip Bailey, Frank Zappa, and many other artists.

Liquid Mind's music is available directly to music therapists on the Music Therapy Matters website (a non-profit organization whose mission is to provide quality music therapy services, especially to assist children with special needs.) From the article: “Composer and songwriter, Chuck Wild has composed music specially designed for music therapists to use in treatment programs...Each song was composed and performed by Chuck Wild, representing a different musical style and is available at eight different tempi ranging from 40 beats per minute to 110 beats per minute. Each song maintains an audible pulse at the specified tempo. Inspired by his collaborations with AMTA and numerous music therapists, Chuck composed this music knowing the many ways in which this would help patients dealing with motor impairments. This customized music may be most suitable for "rhythmic cuing" during gait training and ambulation for some patients; however a variety of applications could be applied. Patients using rhythmically cued music for habilitative or rehabilitative purposes should be under the supervision of qualified and experienced music therapists practicing within their scope of practice. A big “thank you” to Chuck Wild for his generosity in making this music available to professional members of AMTA. Thanks also go to Dr. Alicia Clair for her assistance and consultation in coordinating the availability of this music.”

Michael Diamond: Are there any personal reflections or back-story on particular tracks, what inspired them, etc. — or reflections on the album overall?

Chuck Wild: Between 1983 and 1987, when I began co-composing Max Headroom for ABC-TV, literally dozens of friends died of AIDS/HIV and I was grief-stricken and deeply stressed. Adding to that, the long 20-hour work days typical in those days (1987) for network TV composing, I became sleep deprived and began having panic attacks.

After Max Headroom was cancelled in late 1987, as part of my healing from anxiety disorder, and to help me process the grief (over 60 had friends and associates died in a 10 year period), a counselor suggested I compose music that represented the way I wanted to feel (deeply relaxed). I was so anxious I couldn’t compose slow music, until one day in early 1988, sitting on the rocks at Laguna Beach CA, I realized the sound of the ocean was relaxing me for the first time in months.

So, I drove back to Hollywood and in early 1988 composed the first Liquid Mind composition, “Zero Degrees Zero”  (from the album Ambience Minimus released in 1994), the title of which pretty much described how I felt. I just sat and held chords for hours, shedding many tears, not really that conscious of what I was doing.

The 30 minute piece that resulted from those sessions became the foundation-stone for my 14 album series. Over the next couple of years, I listened to “Zero Degrees Zero” almost 24 hours a day. My own recovery and a total redefinition of my life took about three years of therapy, acupuncture, support groups and making some critical changes in my life to more closely align my inner values with my outer actions.

Looking back, this crisis period was the genesis of a path for me leading to much more fulfilling, happy, and centered life.

MD: What do you draw inspiration from in your music and life?

CW: For musical inspiration, I've always listened to the music of Brahms, Beethoven, Bartok,  Faure, Debussy, Tchaikovsky, Chopin, Rachmaninoff and other composers from that period. In high school, I played organ in our church for 4 years, and learned the technique of playing very slow quiet, yet melodic, classically influenced music.

In my life, I'm inspired by meditation, which brings me clarity of thought, a deeper perspective, equanimity of spirit and peace of mind. I enjoy the readings of Ray Dalio, a hedge fund manager who has been meditating for 40+ years, who has a unique viewpoint on life and running his business. If I had to choose 4 books that changed my life, they would be:

MD: What instruments are played on each track and who played them if other than yourself.

I use nearly 30 synths and virtual instruments. It generally takes a week or ten days to arrange each piece, as I sometimes use nearly 20 tracks of various synthesizers (several Yamaha, Korg, Roland, Supernova, EMU, Roland samplers, and about two dozen virtual synths) on a piece, blended and gently fading from sound to sound to create textural changes. I want nothing that attracts too much attention to itself, and I align and soften most every attack of every note or vocal part in the music. A lot of folks don't realize I have several singers that sing chords & a few melody lines, to bring a stronger organic element. This link describes my process more fully.

MD: How did you first get interested in music and what were some of your early experiences?

CW: At age 4 I had a hip condition called Perthes hip which required me to be immobilized for one year. My parents hired a wonderful caregiver for me, Edna Amos, who carried me to the piano every day and taught me to play.

At age 6, I joined a church choir and bell choir, followed by elementary and high school participation in every musical program I could find. I played pipe organ in our church for youth services for 4 years as a teen, and sang in quartets, octets, and choirs. It was a great experience to participate in music programs from age 6 through 21. At age 21, I went on active duty in the US Navy. Even in the Navy, the captain of my first ship was a former minister who had sung in the legendary Robert Shaw Chorale, and we shared many musical times together during those years.

MD: What is your musical vision? Why are you a musician, what does it mean to you?

CW: My sole musical vision and purpose is to continue to compose and record music that refreshes the human spirit, and that Liquid Mind is kept available to every person in the world that can benefit from it, regardless of their ability to pay.

MD: What are your musical goals in the future?

CW: At age 69, going forward, I plan to continue creating a catalog of concert (classical) piano composition, and manage the necessary business administration associated with my music and other businesses.

I wanted to add that I'm grateful to have connected with artist and consultant Suzanne Doucet, who introduced me to Terence Yallop and Karen Kael, the owners of the wonderful Real Music Label. I've done business with Real music for over 20 years, and I appreciate their unique approach to bringing healing music to the world, music that elevates the spirit and enhances so many lives.

Everything LiquidMind at the Liquid Mind Wikipedia page.

A message for Chuck... Just wanted to thank you for the new album. I think I've worn out my Dream album..lol Thanks again Russ USNR(Ret)

Thank for your kind words, Russ, and for your support of my music.  Best wishes, fair winds and following seas as they say in the USNR : )

Thank you for creating the beautiful music! I just bought all the 12 CDs and are you really not creating more of those? Cheers, Chin Siong.

I must say that I am your number one fan. I love your music and I have a collection of your songs. They help me get to sleep every night when I listen to them. I don't toss and turn - I relax and get a peaceful night sleep. I hope you make more song that are so touching. I am listening to your music right now and I am already yawning. I live in Oklahoma and got started listening to you when I was 15 year old. I was watching a music channel and your song came up. I checked it out and I couldn't find the words to tell you how it sounded. After that I stopped listening to some teen stuff that you would think we listen to, and started to listen to new age. It was so soothing, I downloaded some song to help me sleep and the rest was history.

You sir, help me sleep every night and I couldn't have done this without finding your music. Thank you so much.

I cannot speak enough praise about Liquid Mind's music. I use it in my practice with patients with anxiety disorders and have literally seen it at work during an appointment with a patient coming in for the first time. The patient went from being so anxious she was pulling her hair out to sitting back in the chair and just tapping her feet fast and fidgeting with her hands in 15 minutes. I have at least 10 patients that have started purchasing Liquid Mind albums. I don't know what else to say but...amazing!

Thank you your music made it possible to sleep again at peace. I was searching for the perfect dream music that would make me feel at peace cause at the time I was suffering from many sleep disorders mainly Sleep Paralysis. When I first heard your music I instantly started cyring, the music touched my heart and soul I felt pure peace and comfort as if an Angel was sent to me in the form of your music. I was in a dark hole in my life I was backsliding and your music has been an help to me get get my life back spiritually thats when I ran across Liquid Mind Spirit and I have never stopped listening. I now listen to every album you have made in major details track by track some tracks like lullaby for grown ups and I Am Willing brings me to tears. I can feel every emotion in your music as the way you created it, to me your music is beyond just background music it gives 100% more than that thank you Chuck for making the Liquid Mind music for other people to also experence your work of art I highly appreciate it.