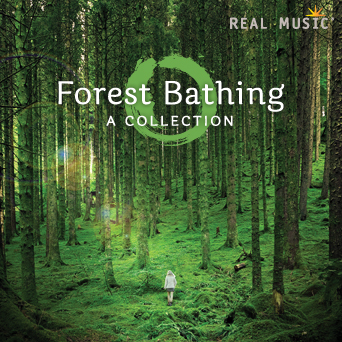 Listening to this recording is like taking a walk in the forest where your cares and worries magically fall away.” —Bette Timm

Forest Bathing is an ancient Japanese tradition known as shinrin-yoku—the medicine of relaxing in a forest. Approached with presence, great restorative healing value for the mind and body can be induced, including lower blood pressure, reduced stress and anxiety and a stronger immune system. This music collection has been specifically curated for its compatibility with the cleansing resonance of trees and may be used at any time for relaxation and to simulate forest healing.

“You didn’t come into this world.  You came out of it, like a wave from the ocean.  You are not a stranger here.”  —Alan Watts

Over the years, Real Music has assembled some stunning compilation albums, and Forest Bathing can now be added to the list. Compiled from albums dating from 1988 up through 2016, twelve artists are represented on fourteen tracks (Kenio Fuke and the late Hillary Stagg have two tracks each). The album title comes from the Japanese practice called “shinrin-yoku,” which translates as “forest bathing” and involves spending time in the forest and natural areas as good preventative medicine. In humans, exposure to some of the naturally-occurring chemicals released in the forest can lower blood pressure, relieve stress and anxiety, and boost the immune system. The music on this album was chosen for “its compatibility with the cleansing resonance of trees and may be used at any time for relaxation and to simulate forest healing.” (Quote from liner notes.) There is a very nice balance of piano/keyboards, guitar, electronica, and harp, and the artists are from all over the world, sharing a variety of musical cultures and traditions as well as newer sounds.

The other ten artists who have been included in this collection are Kevin Kern, Gandalf, Eamonn Karran, Carl Borden, Devakant, Mike Howe, Sacred Earth, Haiku, Peter Kater, and Bernward Koch. Ten of the fourteen selections come from albums that were released at least five years ago, so it doesn’t seem likely that many people would have all of this music on the original albums. My own favorites are “Enchanted Forest” by Kenio Fuke, “Fairy Wings” by Kevin Kern, “Run Deep” by Mike Howe, “Magical Land” by Kenio Fuke, “Sunset” by Peter Kater, and “Softly Awakening” by Bernward Koch.

Forest Bathing is a great album for any time of the year, but could be especially helpful as an antidote to the faster pace of the holidays. Recommended!

Listening to this recording is like taking a walk in the forest where your cares and worries magically fall away. It’s as if you can hear the ancient trees, and feel their healing power. The variety of sounds from Kenio Fuke, Kevin Kern, Gandalf, The Haiku Project and many other favorite Real Music artists contribute to the sense of a rich and diverse ecosystem.

Forest Bathing is an ancient Japanese ritual of walking in the forest and bathing in the resonance nature gives off that they believe rejuvenate the body and ward off disease. This various artists collection, which stretches back to those at the birth of the label 30 plus years ago, is music for walking the in the woods and giving your mind a rest. These tracks were dandy in their original incarnations, and they work well here as a repurposed whole. With some of the top names in New Age on board, this collection lets you meditate whether you want to or not and there ain't a smidge of hippy dippy woven anywhere into it. Well done from top to bottom.

Kenio Fuke’s “Enchanted Forest” starts off Real Music’s latest compilation of healing music, creating a calm and serene mood. Fuke’s usage of ambient noises (birds chirping) works well to set up a soundscape of the outdoors. Next up, Gandalf’s “Love is the Answer” is totally engrossing, using bold strokes that gradually give way to a passionate flute / synth sound that rises and falls like the seasons. Hilary Stagg’s “Beyond the Horizon,” and Eamonn Karran’s “Fascination” then provide competing interpretations of natural and modern elements. Carl Borden’s “A New Dawn” enters now allowing ample time to breathe, and possessing a number of distinct movements that will keep listeners firmly focused on the composition. Following is Devakant’s “Blowing Zen,” one of the most intriguing tracks on the Forest Bathing album. We then move onto Mike Howe’s “Run Deep,” a tender composition that meanders over a soft and sedate landscape. The use of repetition here further establishes a cohesive sound to the composition. Next, Sacred Earth contributes a multi-faceted track with “Vishnu’s Prayer.” This effort has a complex set of emotions that are present from the onset; the flute works well with brooding backing instrumentation. And Bernward Koch’s “Softly Awakening,” a calming and oh so soothing track, is the final inclusion on Forest Bathing. Koch’s blending of traditional piano with a more exploratory New Age sound creates an effort that ends the compilation well.

Over the course of these 62-plus minutes, fans are taken on a journey that will calm them, allowing focus on the big picture after the final strains of Koch’s music concludes. While the songs chosen by Real Music come from different performers, there is a considerable cohesion in the tracks giving the perfect escape for relaxing after a long day at work, a lengthy trip, or any reason one needs to unwind.