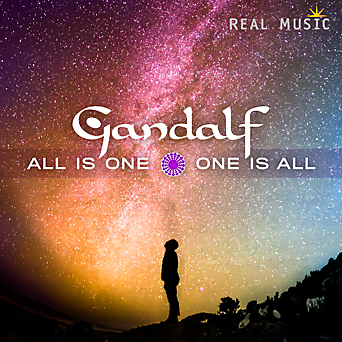 Gandalf is an easily recognized name for many in the new age instrumental community, and the music that he has produced over the years has been a testament not only to his considerable talents and his dedication to creating music that would satisfy his own inspired visions of what he wanted to accomplish with each new release, but also meets the needs of those dedicated listeners who call themselves fans of Gandalf's musical legacy. Gandalf's latest release on the Real Music label is called All is One - One is All and will be available on April 29, 2016 for all his fans around the world who have been waiting for this newest journey into his heartfelt compositions since 2013 when Dreamweaver was released.

With an artist who has such an extensive catalog that began in 1981 with Journey to an Imaginary Land, it would be tempting to try and find common threads in his music and place his current work in some sort of historical framework in regards to his body of music as a whole, but with thirty-seven albums prior to this one, it is best to simply look at All is One - One is All merely as a talented musician’s statement of where he is at in 2016 and what compositions move his heart and soul as he creates music for himself and for his listeners.

Gandalf’s music is a comfort to listen to because it consistently walks a path that plucks familiar strings in the hearts of his listeners and it is this feeling that draws listeners back again and again to his compositions. All is One – One is All features eleven new arrangements and the album has just about 65 minutes of playing time which takes its listeners on a magical journey that will leave them feeling centered and refreshed. While Gandalf wrote the lyrics for the song “All Is One” and composed, arranged and produced all of the music you will hear on All is One – One is All, bringing his vision for the compositions to life is not a solo effort. We also find Agnes Milewski contributing vocals to the project, Merike Hilmar doing a fine job on the cello parts that you will hear on several of the tracks, Karin Leitner doing a marvelous job on the Irish whistle on track 7, Peter Aschenbrenner playing the bodhran, bass, flute and Irish whistle, Vasile Marian on the duduk, and finally Christian Strobl on the drums for track 9.

Gandalf plays a variety of instruments on All is One – One is All including piano, guitars, saz, keyboards, atmospheres and percussion. While in many cases the piano does tend to be the focus, Gandalf uses and interweaves all the other musicians seamlessly into his music so that they become integral parts of the whole that makes each song work. A wonderful example is track 3, the song called “Starshine of Ever.” This song starts off with Gandalf on the piano as the sole performer in this peaceful sonic landscape that is filled with the introspective sounds of his keyboards. But suddenly out of this stillness the sound of the cello joins Gandalf in a wonderful duet between Gandalf’s piano and Merike Hilmar’s emotionally filled cello playing, with each performer building on and adding to the performance of the other until the listener is completely enamored with the song and feels compelled to hit repeat when the song has come to a satisfying close.

The wonderful thing is that the interaction that takes place on “Starshine of Ever” is very much indicative of the way that Gandalf relates to the guest musicians who play parts in the other compositions on this album. As I was listening to the songs on this project I was struck with how much the guest players were an intimate part of the music that I was hearing and how the songs would not be quite the same if Gandalf had treated their contributions as less than essential during the recording or producing aspects of this new project. While All is One – One is All is without a doubt an excellent Gandalf album, it is still good to see that Gandalf is able to allow these guest musicians to add their nuances to his compositions.

While all of the music on this project is impressive and points to the expert musical sensibilities of Gandalf, I must admit that I do have another favorite song besides “Starshine of Ever” and that other favorite would be track 7, “The Fragrance of Eden.”  This song features the Irish whistle of Karin Leitner and also Merike Hilmar’s cello again along with Gandalf on the piano. This is a wonderful song that lifts your spirits and immediately casts your mind to green meadows and lazy summer days filled with nothing more than being a part of the world that surrounds you. In that sense the title “Fragrance of Eden” captures exactly what this song conveys so well in its light, airy melodies and the interactions between the musicians with each adding their own part to the positive emotions of this track. Eden as a place where burdens are lifted and hearts are once again free is the perfect analogy for what the listener feels when they hear this song and allow it to sink into their spirits. It is a song that grabs you in its embrace and makes you feel that all is right with the world if only in that moment the music is playing.

All is One – One is All is a great addition to Gandalf’s sizable discography and one that will be very satisfying to his longtime fans. It is apparent that even after decades of writing and recording music, Gandalf is a very capable composer and is able to craft songs that are imaginative, inspired and able to touch his listener’s hearts. This is truly an album that Gandalf fans will want to add to their collections as he continues to lead his listeners on musical explorations that he started way back in 1981.

Albums:
All is One - One is All
Artist:
Gandalf
Publication:
Ambient Visions
Author:
Michael Foster