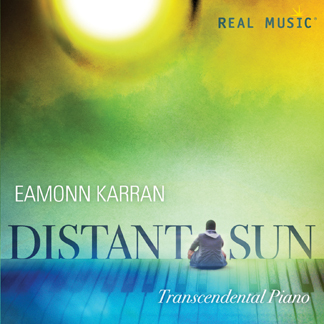 Eamonn Karran is a self-taught composer and pianist/keyboardist based in Derry City Northern Ireland. Even though Eamonn has been playing keyboards with a variety of artists and bands over the past 25 years, it was not until the release of Distant Sun on the Real Music label that he finally put his music out in a tangible form for all of us to enjoy. Although Eamonn is a self-taught musician, the music contained on his debut release speaks volumes about the skill and the sensitivity that Eamonn shows in the music that he has composed and the way in which he delivers it on this album. Eamonn not only composed and performed the songs you will hear on this wonderful album, he also produced and recorded the tracks as well. Other than the uilleann pipes you will hear on track 2 and on track 7 played by Fin Drumm, the entire album was recorded on a Yamaha MO6 workstation. At times it may sound like a piano you are hearing on some of the tracks, but believe me that unless you knew that to be a fact it would be hard to tell the difference.

The album consists of eleven compositions that run just under an hour and during that time Eamonn is able to weave his magic on the keyboards and touch you with the emotions that are right on the surface of each of the songs he has chosen to include. Distant Sun is a comforting album that has a soothing effect on the listener almost as if the music was warm waves thatwere lapping at you as you lay on a beach without a care in the world. While many of the songs are what I would consider warm in nature, the last song which closes out this album reminds me more of a thoughtful and reflective ambient song that leaves you drifting in the void of the cosmos between where you are and the distant sun that this album is named after. This song, called “Aura of Life,” is one of my favorite tracks on this album and is a wonderful way to end the journey that Eamonn has been the guide for during the last fifty-seven minutes.

The album is decidedly not an ambient album, but it does have some elements that lend themselves to be described as ambient in nature. A couple of my other favorite songs from this album are the songs that feature Fin Drumm on uilleann pipes simply because I do so love the sound they produce when they are done right and blended into the overall fabric of the music. “DerryWaltz” is a wonderful song that brings to mind the Celtic roots from which the song springs and fills your mind and heart with the images associated with that part of the world. We have all been exposed to enough information about other countries and their history that music such as what Eamonn gives us with "Derry Waltz" strikes chords within us even though we have never setfoot in that part of the world. "Derry Waltz" is a beautiful song that intertwines Eamonn's gentle touch on the keyboards with the uilleann pipes to create an impressive piece of music that touches both the heart and the mind with images of places far away. The uilleann pipes makes their second appearance on the title song of the album called “Distant Sun” and again the song is a delicate balance between the synthesizer sounds, the keyboards and the pipes themselves, without any one of them taking over the whole of the song and overshadowing the other elements. Eamonn once again shows his skill in allowing each element to occupy just enough space within the song to bring out the feelings of longing that seem to characterize this song. The song seemed to focus on the longing for home perhaps, or for something less tangible in a person's life such as love or understanding. The sound recording was impeccable throughout the album which allows the listener to not be distracted by imperfections, but rather focus only on the music and the emotions contained within each song. “Ascension” was also an interesting song that had elements of chants and a wonderfully ethereal feel to the whole track. Perhaps this is the spirituality that Eamonn spoke of after his serious car accident in 2011. It certainly shows in this song which most assuredly brings to mind the peace and tranquility of walking a spiritual path. All in all this is a wonderful debut from Eamonn Karran and bodes well for his future releases in the years to come. Although I only spotlighted a few of the songs in this review, the album as a whole is filled with great music and there are no songs that I would consider to be lesser than the others. I’m sure that you will find your own favorites just as I have done. Eamonnseems to have found his stride with this album and I'm sure that we will hear more of Eamonn's music in the years to come. Recommended!