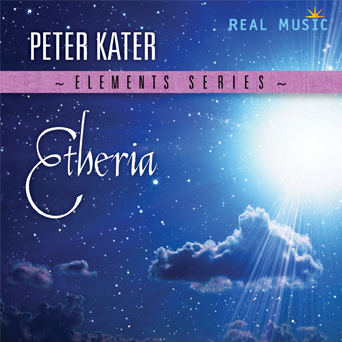 Peter Kater continues with his successful Elements Series that have covered the four physical elements namely Earth, Air, Fire, and Water, and with the release of his latest album, he covers another element that is not quite as physical as his previous elements albums. His new release for Real Music is entitled Etheria and after a few listens to this peaceful gem that Kater has created, I too agree that listeners will immediately feel the other worldly nature of the music that he has composed for this release. I am assuming that the name Etheria is derived from the word ethereal which as Webster’s defines it means light, airy, delicate or even heavenly, and I think those words give you some idea as to what you will find when you play this album.

All the music was composed, arranged, engineered, mixed and produced by Peter Kater, so in terms of who is responsible for the wonderful music that you hear on this release, it is very obvious. Kater also plays the piano, Native American flute, bell chimes, and synthesizers while also handling the sequencing.  The only other person who is listed as lending a hand on this release is Richard Hardy who plays the bamboo flutes and soprano and tenor saxophones. It is very evident that Kater knew exactly what he wanted as he assembled this album and his musical sensibilities shine through on each and every track.

The feelings evoked by the music run the gamut, from an enveloping sense of tranquility that is very conducive to a meditative state of being, to music that leaves the listener in a state of mind that can be defined as warm and dreamy. Kater’s playing is heartfelt and confident on Etheria as each and every song on this release speaks volumes about his skill as a composer and as a musician.  The album features seven compositions that run just shy of an hour, but that is more than enough time for Peter to inspire the listener from the first note of “Heaven’s Window” to the last refrain of “Luminescence.”

I am assuming that since I did not see a credit for a choir or for voices, that what I hear doing vocals on a couple of songs are synthesized “voices” that sound very much like a heavenly choir. The fact that I wasn’t quite sure without checking the liner notes should give you some indication as to how well they were done. One of my favorite songs on this album was the last one which is called “Luminescence,” and it finished out my excursion with Etheria by allowing me to drift off to a serene composition that features Kater on the keyboard along with some electronic programming that lives up to the description of ethereal.  It is only fitting because the first song is my other favorite.  It is called “Celestial Light” and it too offers the listener a fragile, delicate piece of music to immediately clear out the distractions of your day so that you might more fully enter into the music that is directly ahead on this intimate album that Kater has created.

The recording quality is per usual of a very high quality, and Kater’s touch is visible from beginning to end. The flutes and even the saxophones, which I was not sure of, seem to blend into the music without overpowering the delicate compositions that are evident on this release. Kater has once again shown that he continues to build on this reputation from his previous releases, and Etheria stands as a testament to his skills as a musician and a composer.  Kater’s music has always impressed me and as I expected Etheria does not disappoint. Definitely recommended by Ambient Visions.