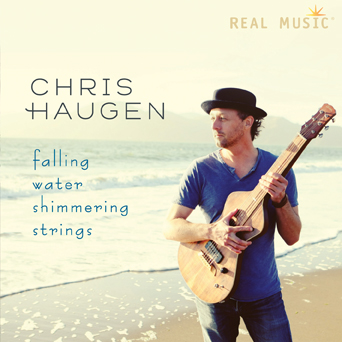 Falling Water Shimmering Strings is the fourth release from guitarist and multi-instrumentalist Chris Haugen and his first album on the Real Music label. He has toured and performed extensively as a sideman and has also worked on a number of film scores. Haugen’s passion for surfing and yoga inspired the music on this album, which consists of seven original tracks that vary in length from about 4 1/2 minutes to a bit over 15 minutes, allowing time for the music to evolve and go where it wants. Haugen performs on Weissenborn guitar (a brand of lap slide guitar), acoustic guitar, lap steel, keys, ambient sounds and drum loops. Ben Leinbach, Mark Degli Antoni, and Hans Christian appear on one or two tracks each (more details below). The music itself is very quiet, soothing and easy to let slip into the background to create a warm atmosphere and a relaxing mood. Real Music’s site lists the album as “Music for: Meditation and Introspection, Yoga and Fitness.”  There is a very strong Indian influence running through much of the music, which is called “ideal for yoga, surfing and other meditative pursuits.” Surfing?  Anyway, the music is spare and peaceful, with lots of open space between many of the notes.

Falling Water Shimmering Strings begins with “Nautilus,” a gorgeous piece played mostly on steel guitar along with keys and ambient sounds by Mark Degli Antoni. “Smooth as Glass” is just Haugen.  This 12+ minute piece has its roots in Indian music and I would have guessed that one of the instruments played was the sitar, but that isn’t an instrument that’s listed. I’m guessing that it must be one of the steel guitars. “Falling Water” is the 15-minute track and also features Mark Degli Antoni on keys and ambient sounds. A bit darker and moodier than the other tracks, this piece clearly demonstrates why Haugen’s music is used in films. It really creates a mood and atmosphere with as almost as much use of open space as with notes and sounds — uncluttered and very effective.  “Spring” is also quite different from the other tracks, with a mesmerizing drum beat and hypnotic ambient sounds behind the acoustic guitar, which is almost incidental to the piece. I really like this one! “Western Yogi” features Hans Christian on sarangi, dhilruba drone, keyboard drone and udu in addition to Haugen’s guitars. Quietly rhythmic and somewhat mysterious, it presents an East meets West musical experience. “Eternal Pipeline” suggests the gentle ebb and flow of ocean waves at their calmest, with soft drumming and pedal steel. “Reef” closes the album with a magical guitar piece that washes over you like warm waves of tropical ocean water — soothing, healing and very relaxing.

If you are looking for some music for yoga, meditation, or even surfing, be sure to check this one out!