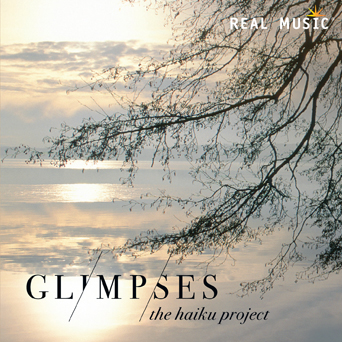 Glimpses is the second album to be released on the Real Music label from The Haiku Project who is actually Danish musician Henrik Hytteballe. Glimpses is a twelve song, 70-minute peaceful journey that offers up a varied sound palette that is both relaxing and still able to hold the listener’s attention as it weaves a most thoughtful sonic space through well-written and produced music. On his Real Music bio page Henrik says that he is never satisfied when he writes music with accompanying vocals as he would rather paint his feelings and emotions through his music alone allowing that to convey those things to which vocals could never do justice. Glimpses is Henrik’s way of offering listeners a chance to understand the passions behind the music that he evidently loves composing and sharing with others through these releases. There is not enough time in the world to compose music that would even come close to capturing the complex sensations that are felt during our lifetimes, but perhaps through music you might be able to offer “glimpses” into that vast storehouse of impressions that we all store deep down inside.

The twelve songs on this album have a variety of names that seems to speak to the title of this release as the listener journeys with The Haiku Project through a landscape that comes from the heart and soul of the composer. While the keyboard plays an important part of the compositions that make up this album, it is also layered with strings and an ambient synth background that gives the paint that is the piano a surface on which to create the images that Henrik evokes so well through his deft touch on the keyboard. A wonderful example of this would be the song called “Dreaming’ that, with its 12-minute length, allows Henrik a chance to journey through the landscape of sleep on a leisurely trip that gives the listener ample time to appreciate the soundscape that he creates with his piano and a chance to contemplate for themselves the world that opens up to those who sleep and dream.

Another favorite song from this release that I found myself being drawn back to again and again was the composition “Angels Are Watching” which comes towards the end of the album, but is one that the listener should not overlook. While the music, the synths and the sounds that comprise this composition, are all rather haunting and mysterious, the listener will be able to feel the waves of emotional energy that pours out of this song. There is a creative strength that you can feel throughout this piece that shows the compositional abilities that Henrik called upon as he wrote and recorded this song. With a title like “Angels Are Watching” the song delivers a mood of reflection that is worthy of the subject matter.

Other standout tracks include “Where is My Horse?” which closes out the album, and a song called “Gullfoss” which even though it is the shortest track on the album, is nonetheless a delightful song that doesn’t feature the piano but rather focuses on the synths to create a wonderfully light and airy song that is simply enchanting. Glimpses is a great way to spend an hour or so allowing the music to take away a little bit of the edge that you come home with after a stressful day at work. It was apparent that Hytteballe, aka The Haiku Project, is a talented individual and was able to pour his feelings and emotions into these twelve songs on this album. The sound quality throughout is impeccable and the production standards are, as usual for Real Music releases, top notch.