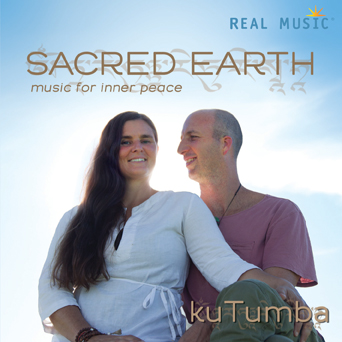 Sacred Earth is one of those groups whose compositions quite simply shift your consciousness immediately into a place of peace once the music starts to play. No matter what mood you might be in when you hit the play button, their songs will allow you to shed the distractions that we all seem to accumulate each day and bring out the inner you that is very often hidden away because there are so very few times during most days that we can relax and be who we truly are. Sacred Earth’s latest effort on Real Music is entitled kuTumba and is an island of peace for listeners who simply want to cultivate a bit of tranquility in their souls as they transition from those things in the world that don’t nourish their inner spirit, to a place where their hearts are free to fly.

Sacred Earth is actually husband and wife duo Jethro and Prem Williams who also serve as co-producers of their music, as well. The album features a variety of instruments ranging from the bansuri flute, acoustic guitar, synthesizer and even an Irish tin whistle. The album features seven wonderful tracks of music that are guaranteed to bring the listener a little closer to that place within wherein dwells the deeper emotions and bring those feelings to the surface.  The total playing time for this album is 70:49 which gives the listener a peaceful and harmonious hour and few odd minutes to reconnect to themselves, or to simply spend the time meditating and detoxifying their minds and their spirits.

Sacred Earth have released a total of eight albums on Real Music and with kuTumba that total now stands at nine albums dedicated to bringing forth the peace that dwells at the heart of each individual.  The duo live in Victoria, Australia and have traveled all over the world spreading their message of peace from within through songs that touch spirits and awakens aspects of the listener that they did not even know were slumbering within.

One of the songs that really touched me was the composition called “Claire’s Song” which is a wonderful combination of Prem and Jethro’s voices and a simple acoustic guitar that accompanies them throughout the song. It is a comforting song that gives the listener a feeling of being embraced by warmth and surrounded by a loving force that wishes nothing but the best for them. Oftentimes it is the simplest of instrumentation and the soft sound of gentle singing that has such a profound effect on people because it reaches past the logical mind and speaks directly to those parts of us that we keep hidden because they are so fragile and we are afraid to expose them to the harshness that is this world. Music, such as this, reaches in with a loving touch reassuring us that it is safe for us to allow those hidden parts to come out and walk freely in this safe space.

The other song that is a wonderful long form statement is the last song on the album which is called “Song for the Elementals.” With wind chimes, bird calls, what sounds like a didgeridoo, a small drum, and the wonderful flute playing of Jethro, this song immediately transports the listener to a more ritualistic musical space that helps to focus the thoughts and brings to mind a more tribal feel to the whole composition. Again the song is a peaceful one and the atmosphere that it conjures is a perfect way to close out the album and to keep the listener in that same zone that has been flowing from the beginning of this project right through to the very end. The music is very introspective and emotional as it creates a contemplative environment in which the listener may immerse themselves before returning to normal space. Unless of course they want to hit repeat and do it all again which is certainly a tempting choice if the listener has another 70 minutes to spend submerged in the calming world that is created by this music.

All in all this album is another skillfully created sonic canvas that features a couple of talented musicians who have brought forth a group of songs that communicates to the heart with a new age sensitivity that speaks volumes about Prem and Jethro’s compositional abilities to translate their innermost longings into music and then share that with their listeners. kuTumba shines as it takes the listener on an inward journey of discovery to a country where each of us would love to dwell all the time. It is a place of peace at the center of our beings that their music seems to hone in on with very little resistance from our logical minds. An excellent album and one that Ambient Visions would definitely recommend.