The One Man Band Exemplified 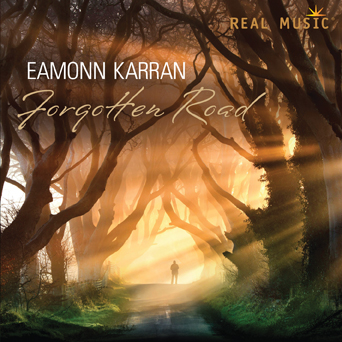 I am a musical traveler of sorts, so when I read the title of Eamonn Karran’s latest release, Forgotten Road, I was intrigued. The cover art suggests that if I walk through the trees, down this dusty road, letting the afternoon sun be my guide, adventure will be waiting around the corner. I could not resist and I made the journey. I am glad I did. In deference to Robert Frost and the Road Less Traveled, adventure was there!

Eamonn Karran is an Irish self-taught pianist hailing from Derry City in Northern Ireland. He is a very busy man as Father, husband, composer and believer in angels. I do not find the last item ironic in any way, for I am a believer, too. Forgotten Road is twelve tracks of captivating contemporary music. There are many solo piano works, but there are some that have traditional Irish accompaniment. Karran has achieved a sense of balance as he explores the world of the known versus the world of the unknown, with a quality of respect, warmth and humor.

“Fairy Dance” begins the adventure with a medium tempo and suggests to me that the fairy just woke and feels the warmth of the sun. She decided to dance in the air. The sun sparkles on the morning dew as my little fairy friend swirls and glides. It is a celebration of warmth.

There is spit of land to the north, just west of Ballylifin in County Donegal. The road narrows considerably, but just three clicks of travel will get you to Tullagh Strand. Eamonn testifies to the wonder of the land in his song the “Angel of Tullagh Strand.” There are unexplained encounters in life that make you a believer. Sometimes it is just a presence, maybe a hand on your shoulder. Other times it is an answer to a prayer or a saving grace, but they can all attributed to one thing … angels. Eamonn’s flowing tune has that mystical energy about it.

“Beyond the Vale” has some synthesized washes in the background, but the piano lead is strong and inviting.  Perhaps this is one of the places I ended up when I took that road.  It was over a green hill that had a path I could barely make out, but it was there. The music allowed me to forget that beleaguered world and explore my own daydreams.

The solo piano number “Hold My Hand” sounds like an old Irish ballad that is played in the parlor when the sun sets and it is time for a pipe and a cup, what the old folk called a scoraíocht, or an evening visit.   It brings back the memory of the warm day, the dusty road and the journey from one village to another. When your greatest riches are fashioned from love, you cling tightly to it whether it be child and parent, dear old friends, or lovers.

Eamonn pays reverent tribute to a sacred place known as the stone palace with the sunny view in the song “An Grainan.” The mystical fort is 4000 years old and one of the highest points of County Donegal and it is bursting with magic. The music contains seraphic voices, flawless piano, and delightful flute. Like the stones, each note in the melody has a story to tell of saints and sun gods and heroes and legends. It is one of my many favorites on the album.

The most placid song on Forgotten Road has to be “As the Folye Gently Flows.”  Marking the divide between Derry and Donegal the An Feabhal, the Foyle River is the fastest flowing river in the North. It is fed not by a single source, but by many tributaries, making it the web that holds the land together, whether it be in nature or in song.  Karran’s crystalline melody sparkles not only like the sun on the Foyle during the day, but like the city lights that reflect off its waters in the night sky.

This is the first time I have heard Eamonn Karan’s music, but I immediately put him on the same shelf as Phil Coulter and that is a mighty high shelf. There is s spirituality to Karran’s music that is a rare find, giving peace to body and soul. After hearing this inspired album, it would be my pleasure to share another journey with the talented pianist and composer.  Highly recommended.