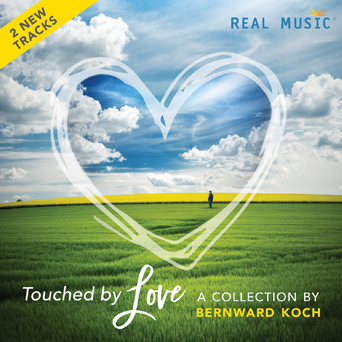 Now here is a man who has had an expansive career. His first album was released back in 1989 and today we celebrate with Bernward Koch, a musical journey that has led us to 2016, with some of the most beautiful and pleasant sounding moments on the piano and keyboards you would ever wish to hear.

This collection of Bernward Koch goodies starts with a couple of tracks from what I like to call the golden years of New Age music, and a stunning reminder of class and beauty with the lush Walking through Clouds and emotive Touched by Love.

The album Walking through Clouds we’ll feature later on, but next up we are given a few more memories of peace filled music with songs from the albums Journey to the Heart and Gentle Spirit, the pieces “Long Way Home” and “Back to Myself.”  Time seems to have stood still since 1999, when “Long Way Home” first surfaced, and it’s as good as ever and still draws a beautiful landscape of a journey over many miles to one who is loved and much missed. “Back to Myself” has a little added percussion to deliver a bit more energy to the composition, but retains that modern beat that can still be found today in the chill-out genre. But Koch’s skill here is to wipe away the years and remind us that time is meaningless, if the music is good, and it certainly is.

Now it’s time to give you a little treat, and move out of our musical time machine and bring you a brand new offering. This one is called “Memories of a Cherry Tree”. Now I mentioned time a moment ago, but this track does remind me in style and emotive creation of the great classic “Memories of Green” from Bladerunner, composed by Vangelis. The arrangement and songs are of course different, but Koch has created something beyond beauty with this one, that reminds me of that lost love and a desperation to stop time. When the bass and percussion kick in, it becomes even more apparent that this is, or should be an all-time classic and is my favourite piece off the album.

From the original album Silent Star we have a gentle piano piece called “Softly Awakening”. Redolent of an early sunrise, “Softly Awakening” flows majestically into the track “Simply Great”, a sensitive but rhythmic composition guaranteed to chill your day out completely, which was featured on the album Walking through Clouds.

Koch has a style that will ease your furrowed brow and relax you. Listen to the next two tracks entitled “The Enchanted Path” and “A Time Ago”, respectively from the albums Day of Life and Gentle Spirit, and you will see exactly what I mean. I must admit I hadn’t heard these two marvelous compositions for a while and it was so great to reconnect with them once more, especially so with “The Enchanted Path,” a song that although released in only 2013, still had that same new age ethic as Terry Oldfield’s Illumination album did in the early 90’s.

The final reminder of smooth genius comes again from Walking through Clouds, in the guise of the track “Bekoflow.” With a sweet melody and an angelic like presence, it’s as beautiful today as ever, as is “Ever Returning,” originally from the album Flowing, and takes us back to 1989. Still those memories flow, a little classy piano that has a slight Jazz motif in the mix, as rhythmic and as charming today as back then.

Fans of Koch are going to be thrilled with this release, but the album also offers two new tracks and the one called “Hope” is the second of those masterful arrangements. A slow downbeat tempo, hinting of a little night time magic, floats from Koch’s keyboards and manifests energies of peaceful hope within the heart of us, the eager listener.

Koch’s last album was called Remembering, released last year, and you can enjoy once more the refrains of the track F“loating Feather.” This is the longest song off the release, well over six minutes of bliss. We then literally drift into an equally tranquil composition called the “Blue Light,” bringing back memories of the album Day of Life once again.

Touched by Love is an album you will be able to spin on repeat for as many times as you like and rest peacefully knowing you have just listened to some of the most tranquil music of all time, like the track entitled “Distant Memories,” originally from the Silent Star release, that carries well its slight Celtic ethic.

The penultimate piece is originally from the album Journey to the Heart, a soft and serene offering called “Little Moritz.” And finally, to round off a superb new release of many reminiscences, is the last track, the title signature piece off Koch’s last album Remembering. With this final closing opus of mastery, Koch peacefully waves to us goodbye for now with another little reminder of that last stunning release.

Touched by Love is a superb collection of tracks that have been lovingly released by the master himself over the last, nearly 30 years. There can be no doubt that Bernward Koch can stand proud as one of the finest composers of genuine New Age music around today.  His originality and tenderness in composing, has over the years raised the bar for those to follow, and on Touched by Love, you have two new tracks to add to your collection as well, to round off yet another incredible moment of musical ecstasy for you to enjoy for many years.