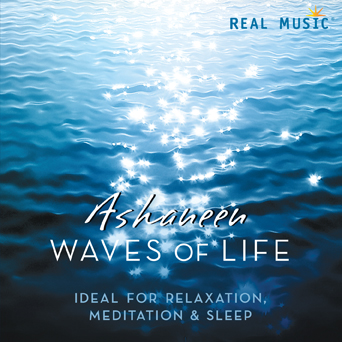 California-based Real Music continues exploring the worldwide, generation spanning phenomenon of instrumental New Age electronic music with the 2015 CD release of Waves of Life by the artist known as Ashaneen. Ashaneen is actually the stage name of Polish composer Piotr Janeczek. Waves of Life features eleven tracks of instrumental New Age magic that clocks in at just under sixty four minutes. For those who haven’t yet experienced Ashaneen’s music, it's supremely relaxing and, due to its therapeutic nature, is not recommended as music you might want to drive around and listen to in your car. On Waves of Life Ashaneen lets the music flow through him as if he was some kind of cosmic conduit. As the artist puts it, “It is as if the music flows through me. In fact, I recognize and treat the music creation as a way of expressing my soul, an infinite, divine part of me.”

The album title, Waves of Life, is particularly appropriate as this music sounds like the aural equivalent of the ebb and flow of the ocean tides — sound waves flowing in and flowing out. From the CD liner note, Ashaneen further adds, “And it came to me that life, in the broadest sense, continually flows and changes like waves. Life is in constant motion, but beyond that movement and change is something else — space, infinity, consciousness, source, God — unchanging and eternal.”

New Age fans will have a great time tuning into Ashaneen’s timeless sonic wisdom, especially as the music of Waves of Life is very much influenced by the artist's interest in holistic forms of healing energy and spirituality — including metaphysical areas such as Reiki, Transcendental Meditation, Qigong and other spiritual paths to enlightenment. Of interest for electronic music watchers is Ashaneen’s superb performance on a range of synthesizers and samplers, including various Yamaha, Roland, Korg and Akai synths and a variety of computer VST (virtual sound technology) sound libraries. But perhaps the most impressive thing about Waves of Life is the fact that it really delivers the goods. As he has stated, his musical purpose is to bring the listener to a state of beyond consciousness — whether through deep meditative states or even sleep. It’s interesting to note that while New Age is clearly Ashaneen’s forte, overall he has released over thirty (30) albums in his digital discography, including a variety of soundtracks, ambient music, nature sounds and even “trance mixes” — the latter recorded under the alias Yans, and he has even worked with various European DJ’s on that side of his music. If your goal is to come to a supremely relaxed state of being, then Waves of Life is the perfect sonic remedy for your mind and body. With the release of Waves of Life, Ashaneen brings his enchanting New Age electronic music front and center onto the world stage.