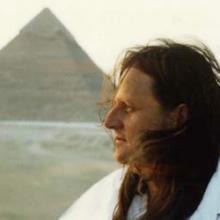 Classically trained, composer, performer, flutiest, multi-instrumentalist Buedi Siebert could be called a “musician without borders.” He collects and plays instruments from all over the world and along with tremendous versatility as a musician, truly has a global consciousness and vision.

A native of Germany, Siebert has been composing and performing for more than twenty years. In addition to recording his own CDs, he composes music for film and theater and produces albums for other musicians. A flamboyant performer, Siebert has toured in concert throughout Europe, the United States (including a performance at Carnegie Hall), Africa, and as a touring member of Andreas Vollenweider and Friends.

In the late 1980s, Siebert met and became a student of the renowned medicine man Sun Bear. During meditative journeys at the ancient Egyptian pyramids, he had the unique opportunity to make recordings in the Cheops pyramid. Profoundly changed by his experiences, he moved to the Black Forest in Germany, where he continues to reside, and began focusing on projects dedicated to benefiting the earth and humankind.

Real Music has released three of Siebert’s recordings — Om Mani Padme Hum, The Light Dance and Wave Hands Like Clouds, each composed to help listeners “recharge their batteries” and come into balance and harmony. Just as we can experience a river as flowing naturally, with a certain carefree air, so it can be with the human spirit or chi. Ideally the chi flows harmoniously, allowing us the freedom to be both an individual and in harmony with all that surrounds us. If we can flow with the characteristic of a river, we can have positive impact in the world. The inspiration for The Light Dance came from Siebert’s commission by Mr. Tjoa to compose music to accompany the practice of his Idogo stick creation. Says Siebert, “It was a pleasure to compose music both to enhance the experience and energy flow of Idogo and other moving meditations and at the same time, music that people can simply listen to and get into the flow of relaxation, rejuvenation and feeling good.”

Siebert believes that music is one of life’s gifts and that to be a composer carries a responsibility, which is to give everything and receive even more in return. Siebert expresses his gratitude as he says, “I thank all of the energies that flowed with me into the creation of this music, as they strengthened it in high measure. I stand before you truly astonished at the beauty that has been created.”

“The Light Dance moved from quiet to majestic and back again with ease. It is reminiscent of a movie soundtrack with an Eastern, Asian feel. At times you feel as though you were observing a parade in front of an ancient Emperor’s palace, and then it flawlessly transitions to the quieter feeling of a Zen garden.”  — Amy Williams, Massage Magazine

“If ever a disc’s title said it all, Wave Hands Like Clouds surely does. This lovely, 12-track assemblage of gentle music supports and sustains the ideal atmosphere of receptivity and boundless flow that help transport client and practitioner alike to a place of healing. The music simultaneously relaxes and buoys, encouraging the mind to empty and the light of spirit to infuse our being . . . It’s a bit like bodywork itself. We enter a session with all the knowledge, training and wisdom we have at our disposal, and then allow intuition and spirit to guide us. It is with the same open and gentle spirit that this music touches our souls."  — Jason Serinus, Oakland, California-based critic, performer and bodyworker