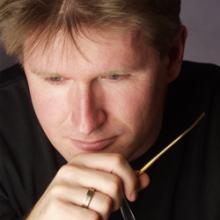 Frank Steiner, Jr. was born in Freiburg, Germany in 1966. There he studied classical piano, trumpet and music theory. After experimenting on numerous musical projects and playing with a wide variety of groups, Steiner founded his own jazz-rock group. He now focuses primarily on composing.

In 1990 Steiner met Ulrich Gitschier, a producer and studio owner in South Germany, with whom he became friend and collaborator. From Gitschier he learned the backgrounds of Far Eastern religions, cultural roots and music. Steiner was fascinated with his newfound knowledge, especially Indian and Chinese music, and began to compose works with these ethnic influences.

The degree to which Steiner was able to absorb the wisdom of the 5,000-year-old text of the I Ching is evident in I Ching Symphony. Steiner worked with musicians playing both acoustic and electronic instruments giving the recording both a traditional and contemporary feeling and one in harmony with the contemplative nature of the ancient oracle.

“The paper in this packaging matches precisely the silky, exquisite music inside…Touching Silk is not east or west and I LOVE it!”  — Renee Gelpi, Galaxie CBC Digital Radio