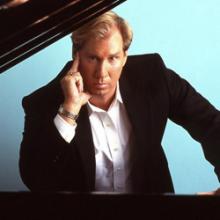 With 22 recordings and millions of albums sold, it is true to say that Danny Wright's music is playing 24 hours a day in both the U.S. and around the world. One of new age music's finest performers, Wright is a brilliantly talented pianist who has sold over 4 million CDs since his debut album in 1986. In 1993 and 1994, he was named by Billboard Magazine as a Top 10 artist in the New Age genre. Three of his albums were included in Billboard's Top 10 New Age Albums in 1992, 1993 and 1994, and he has twice been nominated by the National Association of Record Merchandisers as the Best Seller in the New Age category.

Danny Wright’s destiny began to unfold at age four when he reached up and played the theme from Dr. Zhivago on the piano in the family's living room. Recognizing an exceptional gift, his parents arranged for study under the respected professor, Dr. Harris Cavender. Since that time, Danny’s life has consisted of his love of music, the piano and his desire to share his gift with others. His warm, outgoing personality combined with extraordinary talent has enabled him to touch millions of listeners through his recordings and concerts.

Trained as a classical pianist, Wright composes and performs original compositions that are blended with various influences including contemporary jazz, classical and neoclassical. CD Review describes his original compositions as “...fluidly crafted, backed up by exquisite musicianship.” Wright also performs his own gorgeous arrangements of Broadway and film classics by well-loved composers. When not in the studio recording, Danny performs in concert as a guest artist with pops symphonies and has appeared in concert at top venues from the Berklee Performance Center in Boston to the Schoenburg Hall in Los Angeles.

In 2000, Danny Wright signed with Real Music and released Soul Mates in January 2001. Eight of the eleven songs are Wright’s original compositions and three his unique and beautiful arrangements of favorite songs. Do You Live, Do You Love was released in July 2002. It includes ten original compositions, two of them songs from the musical Phantom Immortal, for which Wright was commissioned to write the music, and one motion picture theme. In March 2003, Real Music released Danny Wright Healer of Hearts, a newly recorded 2-CD collection of his 25 best-loved songs. Disc 1 is comprised of favorite cover tunes recorded for his top selling Black and White Series and Disc 2 includes the best of his original compositions prior to 1999. Soul Mates, Do You Live, Do You Love and Danny Wright Healer of Hearts have all been Billboard magazine charting albums, with Danny Wright Healer of Hearts achieving Top 10 status.

No heart or story is too small to touch Wright. All of his CDs include songs written in response to a fan he may never have met, a child or adult in need of healing or for a wedding, anniversary or other cause for celebrations. It is from real life experiences that Danny draws his inspiration and through his composing and playing that he is truly a “healer of hearts.” His love for animals and the innocence of children inspire him to perform numerous benefit concerts in support of such organizations as the Humane Society, the Pediatric AIDs foundation and the American Red Cross. Danny also plays concerts in support of Breast Cancer Awareness in gratitude that his mother was a breast cancer survivor.

Do You Live, Do You Love