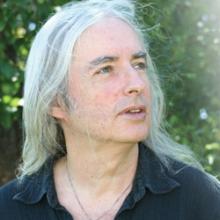 As you listen to Gandalf’s music, you know exactly why this “painter of musical landscapes” chose his name, years before J.R.R. Tolkien’s cult-epic Lord of the Rings captivated filmgoers around the world. Austrian by birth, Gandalf has traveled widely through Europe, North and South America and Asia. The more cultures he has come in touch with, the more he has been touched by the realization that far more things unite than separate the various peoples on our planet. His goal in composing and recording is to create music that dissolves boundaries.

Gandalf’s music is inspired by the beauty of nature and by the wisdom and myths of various cultures. He tells sound stories and describes moods and magical moments that point to other realities behind the scenes in this fast-paced modern world. He wants us to discover our incomparable and individual selves as we relax and “lose” ourselves in the listening. The music is intimate, tender, rich with grandeur and always heart opening.

Gandalf plays many and varied instruments (acoustic and electric guitars, sitar, saz, charango, bouzouki, balaphon, piano, synthesizers and sample-keyboards, and various percussion), blends acoustic with electronic and spherical sounds and weaves folk-elements into symphonic structures to create his unmistakable and unique style. He has worked with international artists, including former Genesis guitarist Steve Hackett, Tunesian vocalist and oud player Dhafer Yossef and English cellist and vocalist Emily Burridge a.k.a. White Horse, whom he met while on a concert tour in Brazil. Gandalf has also written music for theatre and film. Although Gandalf has international recognition, his recordings have been primarily released in Europe.

"Music is one of the most essential things in my life. Since my early childhood it stimulated my fantasy and took me on adventurous journeys to unknown places of my mind. Better than anything else music makes it possible to share my most intimate feelings and visions with others. It is a way to communicate directly from heart to heart. Music is a kind of sanctuary for me, a protected place to withdraw from the noise and craziness in the world where I find comfort and peace. To ever stop making music would mean to stop breathing." —Gandalf

Gandalf’s latest release, Dreamweaver will be available March 12th. “Gandalf has regularly used electric and bass guitars in rock opera style fashion to represent deep illustrations, but Dreamweaver is elegantly portrayed by lighter instrumentation, which presents a whole new tone and atmosphere for the artist, as for the listener. The four person ensemble convey a more natural sound with importance given to lighter touches of acoustic guitar, cello, flute, piano and drums.” — John P. Olsen, Host, NewAgeMusicWorld.com. Read the full review and more.

BUY NOW
Between Earth and Sky